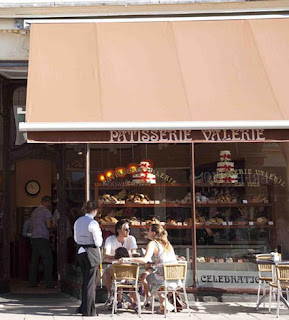 We've had a couple of requests to review some cheaper afternoon teas, which was something we'd already been thinking about, so it seemed like a good time to find some cheap and cheerful teas around London.  We went to the Piccadilly branch of Patisserie Valerie, a well known cake shop with many branches across the country.  They have been serving afternoon teas for a while, and you can book online on their website for most of their shops.

It was a busy Saturday afternoon, and the Piccadilly branch isn't particularly big.  When we got there, there was a large queue out the door, so we were very glad we had booked in advance. 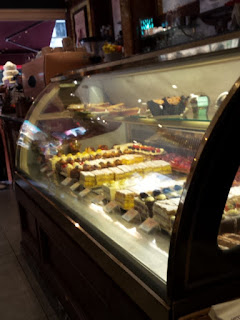 The teas were loose leaf and the Suki tea brand, which we've had in a few places before.  The tea menu wasn't large, but was what we'd expect to see in a café like this - 3 or 4 black teas, a green tea and a few fruit teas.  Mo had Darjeeling, Caroline had Earl Grey with Blue Flowers, and Charlotte had the Green.  The Darjeeling and Green were nice but the Earl Grey flavor was a bit weak.  They were served in pots with built-in tea strainers, so you could take them out if the tea was getting too strong.  We also had no problem getting hot water to top them up.   21/30 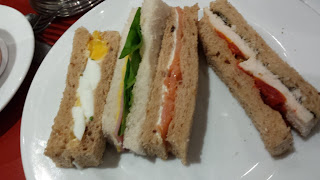 There were 5 different sandwiches each: smoked salmon and cream cheese; egg mayonnaise; cucumber; ham with spinach and mustard; and chicken with pesto and sunblazed tomatoes.  They were either on white or brown bread, and there was also a mini vegetable quiche per person.  The sandwiches were mostly well-filled, and all tasted fine.  They were nothing out of the ordinary but fairly decent, basic flavours.  The mini quiche was a nice addition but the texture was quite rubbery, like it had been microwaved to warm it up.   21/30 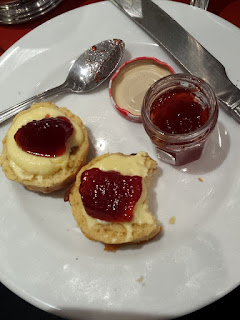 We were given one fruit and one plain scone per person, with clotted cream and two miniature jars of Bonne Maman jam in different flavours - strawberry, raspberry and blackcurrant.  The scones were medium size, with a decent flavor but a bit too dry.  The jam was fine but the cream had melted quite a bit, and was almost runny.   20/30 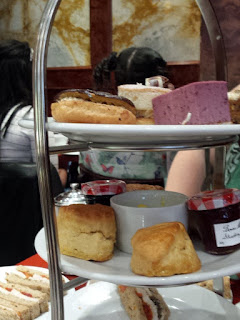 As Patisserie Valerie is known for its cakes, we expected these to be good, and on the whole we weren't disappointed.  The selection consisted of mini eclairs, a chocolate mousse cake, a berry mousse cake, a miniature Victoria sponge and a Coffee and Walnut cake.  The Victoria sponge was the only disappointing one, the sponge was too light and the jam was barely noticeable.  The chocolate mousse cake was especially good though.  They all looked great, and very appetising.  They were a good size and variety, however, there were only 3 per person.  20/30

Overall, we enjoyed our tea at Patisserie Valerie.  The food was generally good, and definitely great value for money considering both the quantity and quality of what we had.  Although the place was busy, we weren't hurried at all and were able to take our time.  The service was also good, very attentive and friendly, and we were offered a doggy bag for the leftovers.

We'd definitely recommend Patisserie Valerie to anyone looking for a good afternoon tea that doesn't cost much.  It's also good for a last minute outing, as it's not necessary to book in advance, and most people aren't there for more than some tea and cake, so customer turnover is fast.  Having said that, it does depend on what day of the week you go, and which branch you choose, and we were glad we'd booked in advance.  The only issue we had was the atmosphere.  It was very busy and very noisy, which we fully expected, but we prefer somewhere a bit quieter.  If you want a more elegant atmosphere though, be prepared to pay a lot more.

Posted by Afternoon Tea Ladies at 20:56 No comments: