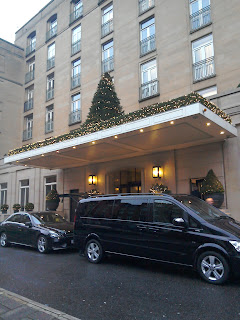 A Knightsbridge designer afternoon tea, Prêt-à-Portea, is "inspired by the themes and colours of the fashion world". The menu is revised every six months to follow the changing seasons in fashion.  Perfect for the Tea Ladies' Christmas treat! 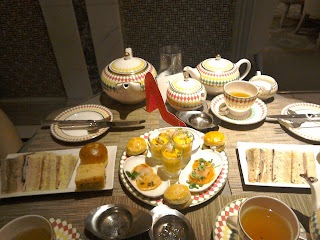 We were shown into a large dining room, full of people having afternoon tea.  We had had to wait around 10-15 minutes before we were seated, possibly because it was close to Christmas, although it may well always be that busy. 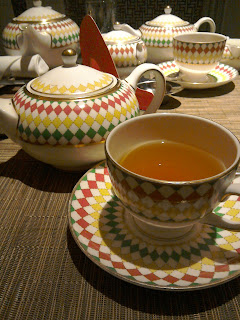 The tea selection wasn't large and there were only 9 real teas compared to 8 herbal or fruit infusions. There were three black teas, two green, two Oolong and two white but there were several interesting varieties within that selection.  Mo had the Bohea Lapsang, Caroline had the Nilgiri Frost then the Ceylon and  Rose, and Charlotte had the Wuyi Oolong followed by the Jasmine Silver.  There was no information on the teas, which was a little disappointing.  It's hard to choose when you don't know what they are, especially if you're someone who doesn't drink a lot of different teas.  Some were brewed better than others - the Ceylon and the Jasmine were far too strong.  Refills, hot water and different teas were happily provided though.  25/30 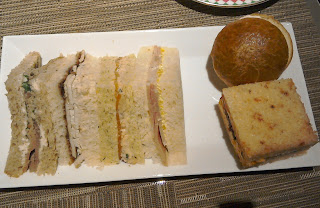 The Sandwiches arrived on large plates rather than on a stand.  They were a good selection: ham and piccalilli;  turkey and cranberry; cheese and beetroot on beetroot bread; egg mayonnaise on brioche (our favourite); beef with horse radish and capers; and smoked salmon and poached salmon on dill and orange bread.  Charlotte doesn't eat red meat, so they provided some alternative sandwiches for her: cucumber and cream cheese; mozzarella, tomato and pesto; and hummus and pepper.   The bread was a little dry on a few of them, and some of the fillings weren't very flavourful but on the whole, they were very nice sandwiches, and a great selection.  28/30 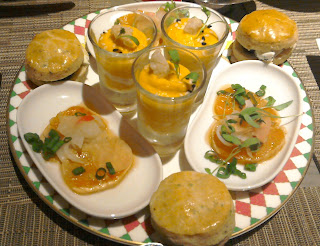 There was no scone course but  miniature savouries were served instead: carrot mousse with sesame seeds and cauliflower; cheese scones with mascarpone and chutney; and salmon ceviche with pickled radish.  We were divided on whether this was a good idea.  The carrot mousse was okay, Mo and Caroline really liked the salmon but Charlotte didn't, and we all agreed there was far too much chutney with the scone.   We all like the idea of extra savouries, but we're not sure these ones added anything to the meal. 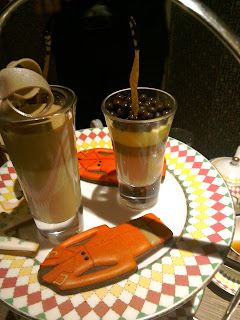 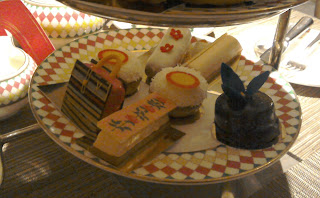 The cakes were all designed to reflect this season's fashion collections and very pretty they were too!  We were given a 'fashion menu' to show what items the cakes were made to match. 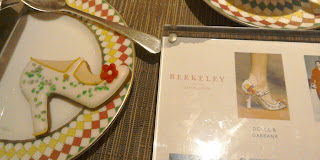 There was no way we could remember them all, or properly describe all the items that inspired the cakes, so we've copied the below from the hotel's website:

The cakes, unsurprisingly, looked great and we really admired the skill they put into creating and executing them.  They mostly tasted great as well, although the biscuits were very dry.  We were offered extras, and we were given handbag-shaped doggy bags of one cake each to take away with us.  28/30 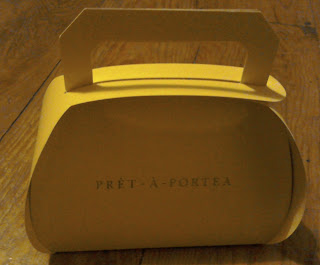 Although the room we were in was nice, it wasn't particularly special or elegant in any way.  It was also very crowded and noisy, so not a particularly relaxing atmosphere.  We were glad we were by the window, and not in the centre of the room.  The service was erratically attentive, the staff were very welcoming and professional but not always easy to find, and several times we had a long wait for something we'd asked for.  We think it was probably due to how busy it was with people out for a Christmas treat, and not the norm.

For  a special occasion, it's a good place to go.  The food and the tea are good, and there's plenty of both.  No scones and cream, but plenty of cakes for a sweet tooth.  Unlike afternoon teas of a similar price, the Pret-a-Portea has a specific theme which is done well, and makes it stand out from the crowd.  However, we'd probably advise you to go at a quieter time of year.

Posted by Afternoon Tea Ladies at 19:27 No comments: