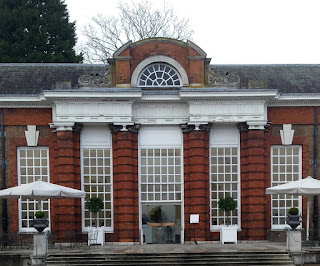 Kensington Orangery is a beautiful, airy building with high ceilings and long glass window, situated next to Kensington Palace, which is a Royal Palace and currently the residence of  William and Kate - The Duke and Duchess of Cambridge.  The Orangery was built in 1704 for Queen Anne when she was a princess.  She used it to host parties - I wonder if she served tea!

We had been meaning to go there for some time, so we were very pleased to be invited there for afternoon tea.

The tea selection wasn't large - only one green, 4 herbal, and 6 black teas (four of which were blends, including two variations of Earl Grey).  Mo had the Royal London tea, Caroline had the Afternoon at the Palace, and Charlotte had the Earl Grey with Blue Flowers (Lady Grey).  The teas were loose leaf, and all very nice.  The selection wasn't very exciting but the teas were good quality and the three we had were distinctly different.  We liked the fact they have their own special blends, as we felt it added something to the experience.  The teapots were small but the waiter quickly brought us a large pot of hot water to top them up with. 21/30

There were 4 types of sandwiches: egg mayonnaise on a bridge roll; smoked salmon and cream cheese on a mini bagel; cucumber and mint on plain bread (2 each of these); and a coronation chicken wrap.  They were all very small, canapé size sandwiches, and are the smallest sandwiches we've ever had in an afternoon tea.  However, they were all nice, good quality sandwiches.  They tasted freshly made, and we liked the different breads that were used.  They also looked nice, which we don't often find - even the best sandwiches we've had just look like sandwiches on a cake stand, but the use of different forms of bread gave them an added variety, so they looked dainty but interesting.  21/30 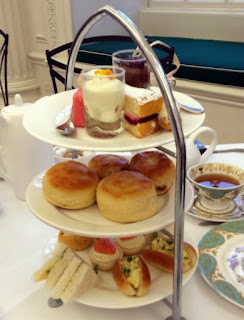 There was one fruit and one orange scented scone per person.  They had a good flavour and a light, slightly cakey texture rather than being crumbly, which wasn't to everyone's taste.  However, they were well made, very tasty and obviously homemade as the size of them was a little erratic.  The clotted cream was room temperature, so nice and spreadable, but the jam was pourable, and was actually running off the scones, which made them a bit tricky to eat.  22/30

The cake selection consisted of a small slice of sponge cake each, 2 orange mousses, 1 chocolate and berry mousse, 2 orange eclairs and a slice of battenberg.  They were all small and dainty, and looked very appetising.  The sponge was our least favourite as it tasted of too much baking soda, and the filling didn't really stand out.  The eclairs and mousses were very nice but the marzipan on the battenberg was quite wet and sticky.  There wasn't a lot of flavour variety, but we did like that they had orange flavoured cakes and scones, to fit in with where we were.  The only problem with this was that Charlotte couldn't taste most of the orange flavour because she was drinking a citrussy tea.  We'd really recommend you don't have an Earl Grey if you go here.  Although there weren't many cakes, it balanced well with the quantity of the sandwiches, and we didn't feel that we'd had too much sugar, which often happens with an afternoon tea.  18/30 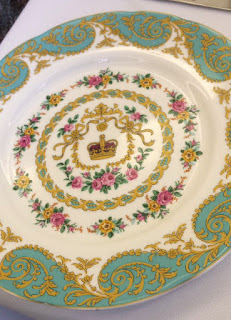 Despite the time of year (January), the Orangery was full of people having afternoon tea, but we didn't feel crowded at all, and we couldn't even hear the conversation at the table next to us.  Even in winter, we had a lovely view of the grounds, although it would definitely be nicer in summer.  The atmosphere was very relaxing and we didn't feel rushed at all.  We all enjoyed our tea, and we liked the addition of orange to the scones and desserts, to echo our surroundings.
The Kensington Orangery was a lovely place for afternoon tea, and we're very glad to have been there.  Although we've been to many places with unlimited refills, and so much tea we were practically swimming, we didn't feel that the smaller quantity of food detracted from the experience.  This was exactly what an afternoon tea is supposed to be - a way to fill the gap between lunch and dinner, not a meal in itself.  The room is very grand and elegant, and its situation next to Kensington Palace makes it a great place for tourists to experience a traditional afternoon tea.  It's possible to buy a combined ticket for afternoon tea at the Orangery and entry to the Palace, which is definitely worth a visit.