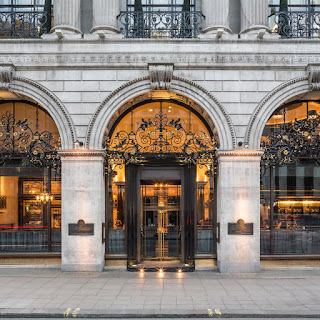 The Wolseley is a high-end café on Piccadilly, in between Fortnum  Mason and The Ritz.  It describes itself as 'a café-restaurant in the grand European tradition.  It has a good reputation, especially for breakfast and brunch, so we were looking forward to going there for afternoon tea.
Inside, it is a beautiful room, with high ceilings, pillars and balconies.  It was very busy, there wasn't a single empty table in sight when we arrived.  This may have been why we had to wait nearly 20 minutes before anyone took our order.  Not a great start. 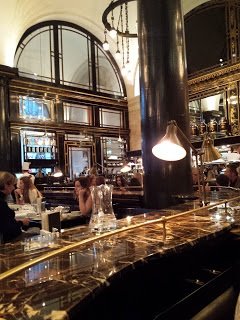 The tea selection was small, with only 8 teas available and all but two of them were black.  Caroline had the Earl Grey, Charlotte had the Green and Mo had the Afternoon Blend.  They were all loose leaf and all decent quality, although the Green tea had a strange, almost smoky taste to it which wasn't very pleasant.  We eventually got some hot water when we asked for it, although it wasn't much and the waiter didn't leave the pot, so we could have done with more.  Overall, this was disappointing. 19/30 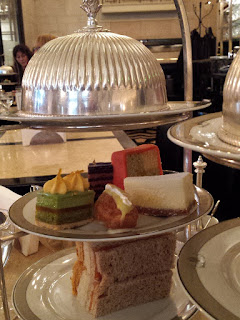 There were five sandwiches per person: smoked salmon; egg mayonnaise; cucumber and mint; cream cheese and celery on tomato and pepper bread; and chicken with tarragon.  The sandwiches were all on different breads, although none of it was listed on the menu and we weren't told what all of them were.  The fillings were sparse, especially the cream cheese, and none of us could taste mint with the cucumber.  The chicken and cream cheese sandwiches had very strong flavours, while the cucumber and egg mayonnaise had barely any taste at all.  19/30 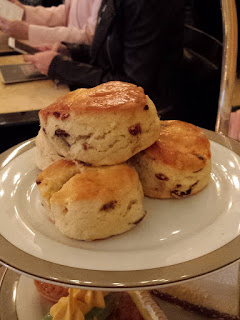 There were two fruit scones per person with strawberry jam and clotted cream.  They were very good, some of the best scones we've had, and were kept warm with a cloche on top of them.  It was a pity there weren't any plain ones though (one woman next to us took the sultanas out of hers), or another choice of jam.  19/30 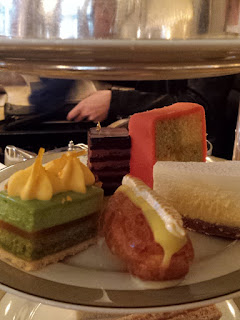 The cakes consisted of battenberg, a chocolate opera cake, a pistachio and apricot layer cake, a lemon meringue éclair, a fig and frangipane tart and vanilla cheesecake.  There wasn't one of each per person, so we had to negotiate over the ones we wanted and halve some of them, finally ending up with three each, which we felt was quite poor.  The chocolate cake was very good but the battenberg and tart were tasteless, while the pistachio and apricot cake tasted strongly of almonds.  They didn't even look appetising, with lots of pink and green, although there was a good variety of styles.  18/30
Overall, we were very unimpressed with the food, and it was only made worse by the appalling service.  Every time we asked for something it took ages to arrive, and we even had to ask three people for the bill before we managed to pay.  We're not really sure why this happened, because even though they were busy there were an awful lot of staff visible.  In addition, we found this expensive for what you get and didn't find it good value for money at all.  Essentially, this is a beautiful place and probably great for a Sunday brunch but don't bother with the afternoon tea.