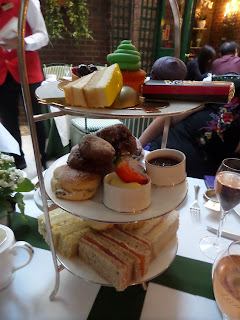 The Chesterfield Mayfair is a luxury hotel in an 18th century townhouse just off Berkley Square.  We were invited along by the manager to have a look around the hotel and try their afternoon tea, which has a Charlie and the Chocolate Factory theme.  We don't often go for complimentary afternoon teas, as we are very honest in our reviews and we're always a bit worried that we won't like the tea!  However, The Chesterfield has an excellent reputation, and it has been on our list of places to visit for some time, so we were pleased to have the opportunity to see what it's like. 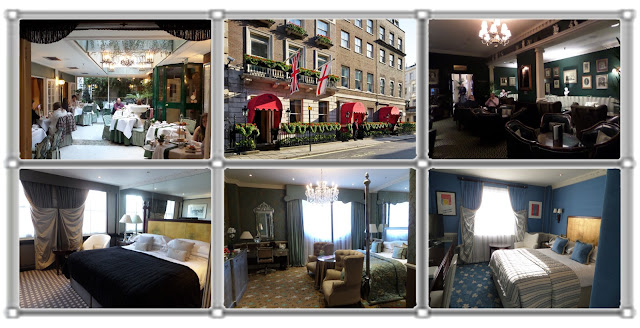 First of all, we were shown around the rooms.  The Chesterfield has a mixture of individual and corporate clients, and has a variety of rooms on offer, all with a range of amenities and free internet access.  The rooms we saw were all gorgeous, and surprisingly quiet for a hotel in Central London. 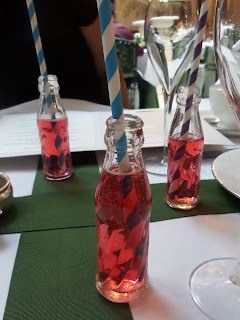 Afternoon tea is served in their conservatory, which is prettily decorated in green and white.  Gluten Free and Vegetarian afternoon teas are offered as standard on the menu, which was nice to see.  To start with, we each had a small bottle of "fizzy lifting drink" with popping candy in, which was a fun start to the tea, and started the theme straight away.  We also had a glass of rose champagne, an optional extra, which adds £7 to the price of the tea. 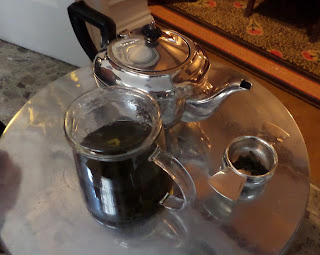 We were given the menus and told that we could try as many teas as we liked, and have refills of the food.  The tea selection wasn't large but included Oolong, green teas, herbal teas and a flowering tea.  They had also had a special Willy Wonka chocolate tea, which Caroline chose to try.  Mo had the Assam and Charlotte started with the Oolong, then finished with the flowering tea.  All of the teas were lovely, and the flowering one was very light and refreshing at the end of the meal.  We were surprised by the Willy Wonka tea, as we've all had chocolate teas before and been unimpressed, but this one had quite a subtle chocolate taste that mixed well with the black tea.  All our teas were served in different teapots, so we had no trouble telling them apart, and the pots were placed on side tables next to us to leave room on the table for the cake stand.  Overall, we were very pleased with our teas.  27/30 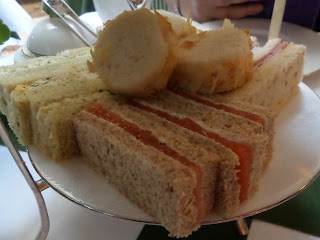 There were 5 sandwiches to choose from - egg mayonnaise, ham with cheese and chutney, smoked salmon, cucumber and cream cheese, and chicken with almonds and grain mustard mayonnaise.  There were also vegetarian and gluten free options listed on the menu.  The sandwiches were all on different breads (we particularly liked the basil bread with the egg), and the chicken ones were cut into circles and coated on the sides with slivers of almond.  They were all well-filled and very good quality, especially the smoked salmon.  26/30 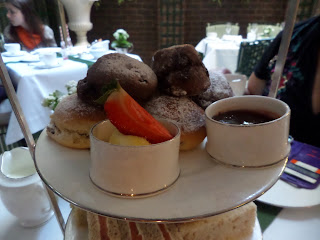 There was a fruit scone and a chocolate scone with chocolate chips each, along with clotted cream and strawberry jam.  The chocolate one was a nice change, and we generally liked it, although Charlotte found it a bit dry without the cream.  They were medium size and both types of scone had a good flavour, however the outsides were really crunchy, which gave them a strange texture we didn't particularly like.  24/30 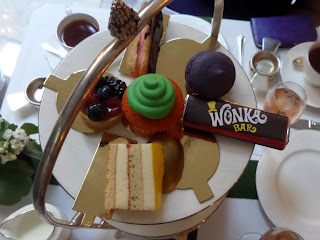 The cakes looked beautiful, and we really liked the addition of a Wonka bar, which was chocolate and puffed rice.  We also had a golden egg of dark chocolate filled with fruit puree, a blueberry macaron, a fruit tart, a bubblegum flavoured eclair, a layered lemon opera cake and an Oompa Loompa cupcake, which really looked like an Oompa Loompa with its swirl of green icing.  There was a particularly good variety and they were all very well made.  Although we couldn't generally agree on them, this was because of personal preference rather than any problem with them.  Charlotte's favourite was the golden egg, which was Caroline's least favourite because she doesn't like dark chocolate.  Her favourite was the Wonka bar, which was a bit too sweet for Mo.  However, we had no problems finding things we liked, and we definitely had plenty.  26/30
To end the afternoon tea, you are given an everlasting gobstopper and get to choose a golden ticket/envelope out of a hat, which will give you a prize the next time you come to Chesterfield for tea. 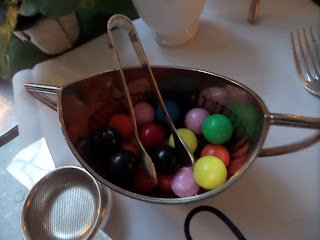 Overall, we feel that this is the best themed afternoon tea we've been to.  They have put a lot of effort into incorporating elements of the story into their food and presentation, and it works really well.  It's a theme that will appeal to all ages, which isn't always true of a classic afternoon tea.  For any fans of the book, this tea is a must.
The Chesterfield change their afternoon teas 2-3 times a year, and will be offering a seasonal one for the Christmas period, so the Charlie and the Chocolate Factory themed tea won't be available after the 22nd of November.  We would have no hesitation in going for a different one though, as the standard of the food, the atmosphere and the service were all very high.  We'd go as far as to say this is the best service we've had so far.  The waiters were friendly, knowledgeable, very attentive and explained everything well.  We overheard them giving the same explanations and standard of service to other tables, so we know it had nothing to do with us being there to review the tea.  It would be a great one for a special occasion, and as such is good value, as we felt it rated very highly among the big London hotels, and has the advantage of being slightly cheaper than many of them.


P.S The Chesterfield are currently offering a Gin and Tonic experience in their bar, where the staff will go through different types of gin with you and show you the different botanicals.  If you're a gin lover, this looks great! 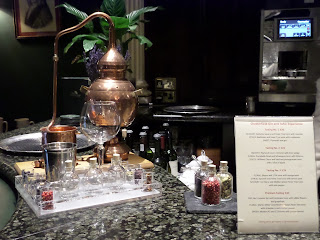 Posted by Afternoon Tea Ladies at 19:33