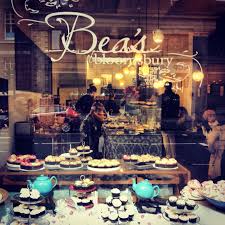 We had heard a lot of good things about Bea's of Bloomsbury.  They describe themselves as having a "casual, no-frills take on Afternoon Tea" which sounded inviting.

First impressions were pretty favourable.  It's a small cafe and was very busy  but the staff were  friendly and attentive.  The cakes on the counter looked good too.

The teas were from Jing's range - not a large selection but good quality.  Mo had Assam, Charlotte, Green Gunpowder and Caroline, Vanilla Black. The tea was well brewed and there was plenty of it with hot water top-ups offered.  20/30 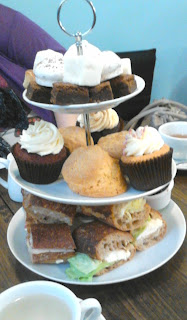 The sandwiches were all  baguette type rolls which were very chewy.  There were 3 fillings; cream cheese with nuts; mozzarella, caramelised onion and lettuce; and parma ham with cheddar - one of each per person. All cheesy and all sadly bland. It seemed an odd selection, especially as they offer many other types of sandwich in the café, but we weren't at any point offered a choice.  They were generally very disappointing. 10/30

The scones were a bit better - they had a good texture and were a decent size, though there was only one each.  The raspberry jam was very good but the cream was a bit solid (probably needed to have been taken out of the fridge sooner). 17/30

The selection of cakes seemed a little odd,  There was a  passionfruit marshmallow, 3 types of cupcake - vanilla, red velvet, peanut butter and chocolate - a meringue, 2 different types of brownie and a blondie (basically another brownie).  This didn't offer much variety and, as with the sandwiches, there was a much greater selection at the counter.  The marshmallow was very good but the cupcakes were stodgy and overly sweet and the brownies were.....brownies.  Again, we weren't offered a choice of cupcakes, despite the wide variety at the counter, so initially got two (peanut butter and coffee) that only Caroline would eat, and had to ask to swap.  16/30

Having heard so many good things about Bea's, to say we were disappointed is an understatement.  A 'no-frills' afternoon tea is all very well, but as you can see from the photo, this one didn't even look appetising, it was mostly various shades of brown, which is possibly why this is the only photo we took.  The sandwiches and cakes were both extremely dull and lacking in variety, which was made stranger by the amount of options clearly available at the counter.  Added to that, the place is small and noisy.  We were constantly being bumped into by people going past, and honestly couldn't wait to get out of there.  The only up side was the lovely staff, who were very helpful and accommodating.  Overall, not a good place for afternoon tea, you'd be better stopping here for a cake or a quick lunch.

Posted by Afternoon Tea Ladies at 20:00