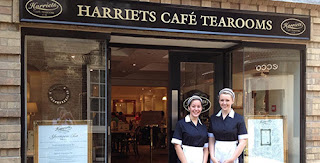 On a cold and rainy Summer's (allegedly) day, we went to Cambridge for a day out and stopped at Harriet's Tearooms for afternoon tea.  Luckily, we had booked in advance as the place was packed.  It's in the centre of Cambridge, and very popular as both a tea room and a bakery.  Plus, on a rainy day, its frontage looked cosy and inviting.

The menu had a choice of different afternoon teas, and you could ask for Vegetarian or Gluten Free options.  We all went for the Special Afternoon Tea, as the description matched what we would consider a traditional tea.  There was a cheaper option that came with a slice of cake instead of a variety of patisserie cakes, and there was also the option to add champagne or prosecco. 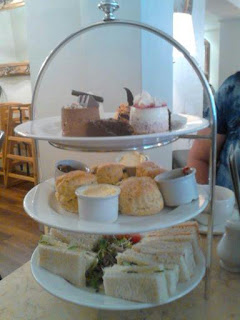 The tea menu wasn't extensive but was fairly good considering the type of place.  There was a decent selection of black teas, as well as a few green, rooibos and herbal teas.  Caroline had the Russian Caravan; Mo had the Special Blend; Honorary Tea Lady Dave had the Assam; and Charlotte had the Green Jasmine.  The teas were okay but nothing special.  They came in metal pots which inevitably get very hot so we all had to wait for a bit before we could touch them.  We did get hot water when we asked for it, but because they were so busy, we had to wait quite a long time before it appeared.  We did get refills though, so all had plenty of tea. 21/30 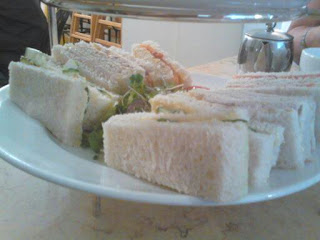 The sandwiches selection consisted of Smoked Salmon, Cucumber and Cream cheese, Chicken and Egg mayonnaise all on plain white bread.  The fillings for all the sandwiches were nice, and the Chicken was particularly good, but the fillings were a bit erratic, with a few sandwiches only partly filled.  There were no refills and we didn't really expect any, but it would have been nice to have a 5th type of sandwich for the only savoury course (or maybe just more generous fillings).  17/30

We had one plain and one fruit scone each, with raspberry jam and a pot of cream per person - much better than having to share!  The scones were a decent size and tasted fresh and homemade.  Unusually, this was our favourite course.  24/30 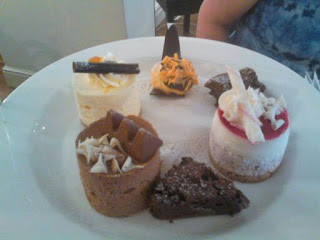 Considering Harriet's is also a bakery, we should have had some amazing cakes, but we realised when we were leaving that the cakes aren't specially made for the afternoon tea, but are dependent on what they have left at the counter.  This meant that instead of a nice variety, we had one small orange mousse-filled choux with a chocolate curl between two people, one brownie per person, and 3 different types of cheesecake between two.   One pair also had a macaron to share.  The varieties of cheesecake (as far as we could tell) included toblerone, raspberry, lemon and lime, mango, and brownie.  All the cakes looked great, and were well made but we were disappointed with the selection. 18/30

Harriet's is clearly very popular.  With its traditional style, and waitresses in the old-fashioned black dresses with white aprons, we can imagine it would be a great place for any tourists who want to visit an authentic British tearoom (although it actually opened in 2012).  Their popularity is a bit of a problem though, as it affects the quality of their afternoon tea and means that the atmosphere is more that of a cafe than a tearoom.  The noise of the shop area, with people coming and going, made it very difficult to hear the music they were trying to play.  The staff were nice but it was hard to get their attention, and they were so busy that nothing arrived quickly and we occasionally had to ask twice for things.  It also means you really need to book in advance unless you're prepared to wait a while for a table.  The food was decent but at £17, it's fairly average value for money, so you might be better off just going there for a cup of tea and slice of cake.  Definitely not a place for a special occasion but nice for a rainy afternoon.

Posted by Afternoon Tea Ladies at 18:27