The Bull's Head, Chislehurst - A Most Traditional Afternoon Tea, £15

The Tealadies and Honorary Tealady Dave went to Chislehurst for a day out.  It's accessible from several mainline stations, and took roughly 40mins to get there from Victoria.  Chislehurst is a pretty village in Kent that has its own tourist attraction - Chislehurst Caves - which were used for shelter during World War II.  We spent an hour being taken round on a guided tour, before making our way to The Bull's Head for afternoon tea.
The Bull's Head is a Young's pub which has hotel accommodation, space for weddings, a restaurant, a bar, garden and tearooms.  The restaurant and tearooms are newly done, so they have only just started serving afternoon tea.  There are three options available - A Most Traditional Afternoon Tea (£15), A Most Unusual Afternoon Tea (£20) which comes with a Hendrick's gin cocktail, or A Most Decadent Afternoon Tea (£23) which comes with a glass of Champagne.  Charlotte went for the Traditional, and the other three chose the Unusual Afternoon tea. 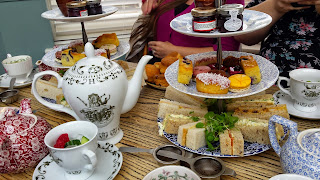 The choice of teas wasn't extensive, but we wouldn't expect a large range considering the type of venue - four black teas, one of which was flavoured, one green, a rooibos and 3 herbal.  However, they were all loose leaf and sourced from a local tea provider, the Kent and Sussex Tea and Coffee Company.  They even had their own speciality Bull's Head Blend.  Mo chose the blend, Charlotte had the China Green, Dave had the Lapsang Souchong and Caroline went for the Blue Lady - a flavoured black tea named after the Blue Lady Ghost which haunts the village in Kent where the tea company are based.  The teas were excellent, we were all really impressed with them.  The Lapsang was very smoky, the green tasted very fresh and the Blue Lady was a lovely floral tea.  They were all well brewed, and didn't get bitter towards the end of the pot.  We had hot water to top the pots up, and were offered refills of the tea.  26/30 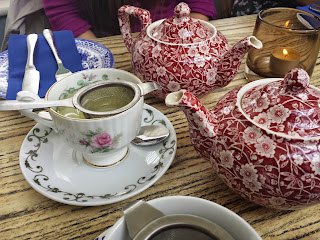 There were five sandwiches per person - Smoked salmon, Cheddar and Branston pickle, Egg mayonnaise, Ham and mustard and Coronation chicken.  Quite simple sandwiches, no interesting breads or unusual combinations but they were all very good.  The fillings were tasty and plentiful, and there were a couple of different breads, which were nice and fresh.  There were no refills but five sandwiches is a good number, and the amount of filling in them meant that we weren't left feeling we could have done with more.  The only issue we had here is that one of us doesn't eat red meat and there didn't appear to be a substitute (e.g. cucumber), so ended up with 3 cheese sandwiches.  If you're vegetarian, it might be worth mention this when you book.  Overall though, we enjoyed the sandwich course.  24/30 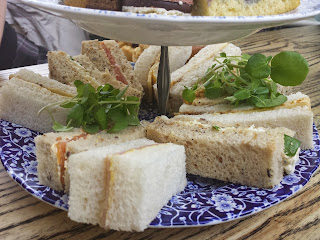 There were two medium sized scones per person, one fruit and one plain.  They were served with clotted cream, strawberry jam and morello cherry jam.  The cream was room temperature, so spreadable, and we had no problem getting some more.  The scones were nice, a little bit floury but it wasn't that noticeable once you put on the jam and cream.  They were served warm and on a separate plate, as they didn't fit on the cake stand.  The jams were nothing special, they were miniature, hotel breakfast style jams but it was nice to have two flavours.  21/30 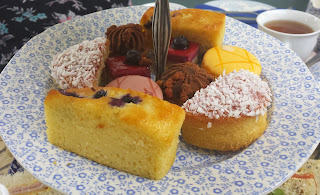 We had several small cakes per person - a small jam and coconut sponge, a miniature blueberry tea loaf, a macaron of various flavours, a miniature layered gateau (either blueberry or coffee and chocolate), a chocolate topped bakewell tart, and a miniature apricot tart.  They all looked very pretty, and there was a good variety of petits fours.  The sponge cakes were well made, the macarons and gateaux were particularly good and they were all a nice size.  It was a good amount, and none of us felt that we wanted more.  It was definitely the best cake course we've seen in comparably priced afternoon teas.  25/30

The Hendrick's cocktail was also excellent.  It was a very summery cocktail that was light and refreshing.  It went well with the food and was nicely presented in a Hendrick's branded teapot and cups.  The Hendrick's teapot was markedly different from the other teapots, which was really helpful in not getting them mixed up! 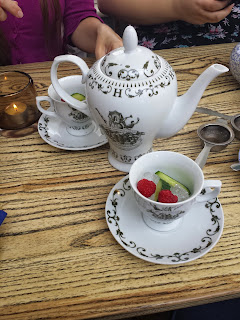 The service was very good, the staff were friendly and helpful and brought everything quickly.  We also liked the setting and the relaxed atmosphere.  Even though the room was next to the beer garden, only partially divided from the restaurant and there was obviously a wedding reception in the room next door, none of these were noticeable and you really felt like you were in a tearoom rather than a back room of a pub.  The room isn't that big, so it's advisable to book in advance.  It's a shame the afternoon tea isn't available on a Sunday, as we can imagine them doing a roaring trade on Mother's day. 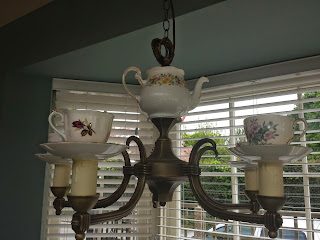 The thing that really stood out about this afternoon tea was how much thought had been put into it.  The room was decorated with colours and furniture that helped it to feel light and airy.  There were also tea cup chandeliers, quotes about tea on the wall, pretty mismatched china and chairs that weren't overdone, and a central stand of cakes to tempt you.  All of it felt like the people behind it had put effort into making this a good afternoon tea in a lovely setting.  We particularly liked the fact they had sourced their tea from somewhere local, and had their own blend when it would have been so easy to go with the standard Twinings varieties.  Also, at £15 for the standard tea, we felt that this was good value for money for the amount and quality of what was included. 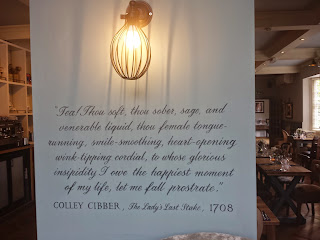 Overall, we were very impressed with The Bull's Head.  It's a nice place for an afternoon with friend's or for a special occasion.  If you're in the area or you're looking for a day trip from London, then this is well worth a visit.