Mini Review - Afternoon Tea at the Corus Hotel Hyde Park, with a glass of Cava - £32 per person
This is a mini review because only one Tealady (Charlotte) was present.

This afternoon tea was bought for me as a Christmas present, so, realising it was about to expire, I took Honorary Tealady Dave along to the hotel on a Thursday afternoon in March.  I assume that the fact it was Thursday was the reason for it being completely empty.  There were some hotel guests finishing lunch in another section, but we were the only ones having afternoon tea in the (cobweb-strewn) conservatory, which overlooks Hyde Park (with a main road in between). 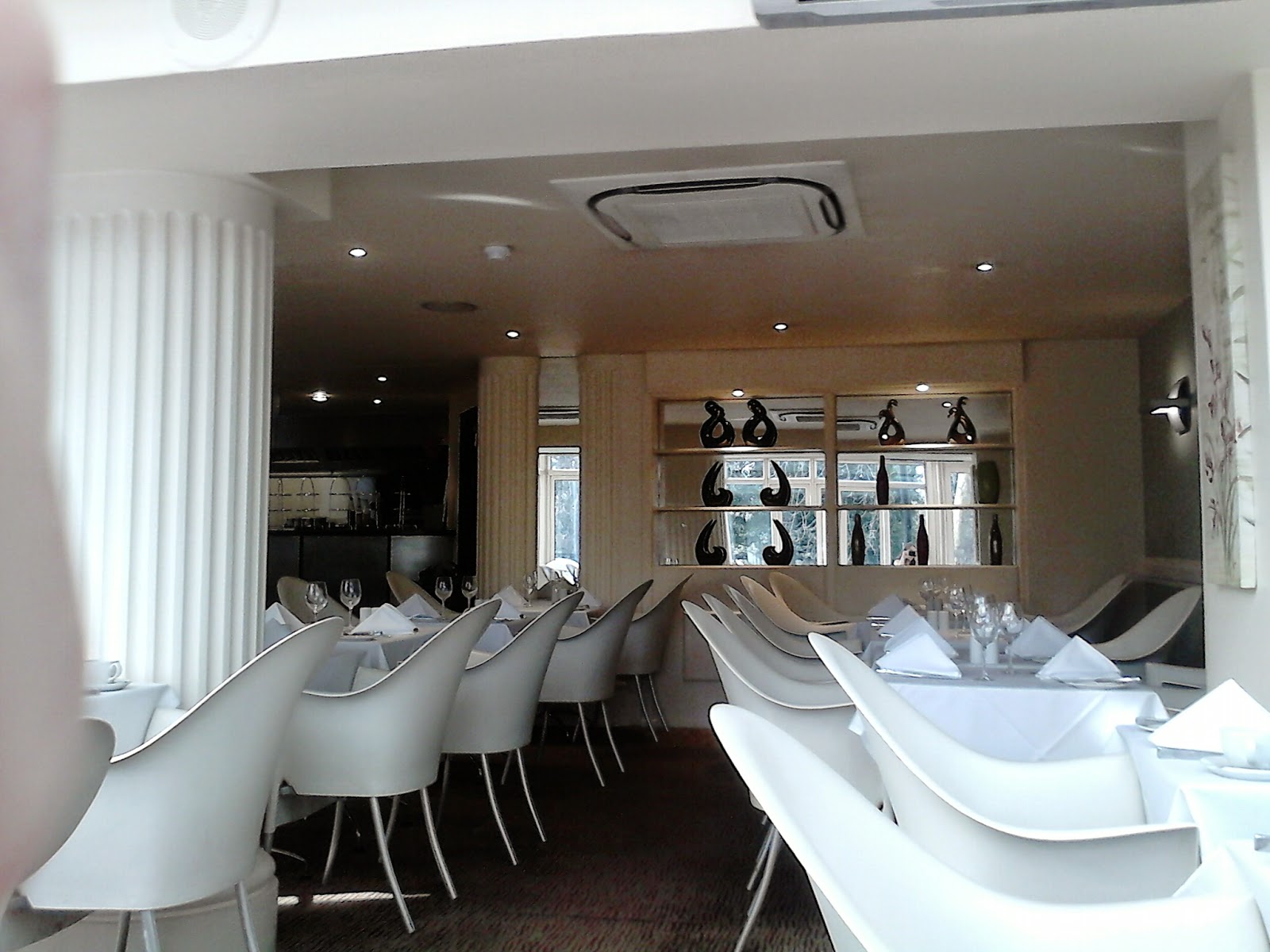 The worst thing about this experience was the service - we'd been there 40 minutes before we were given food, and then the sandwiches weren't what we'd been told.  As I don't eat red meat, we had to send them back as I could only eat one of them.  At least we both had a glass of Cava to keep us going. 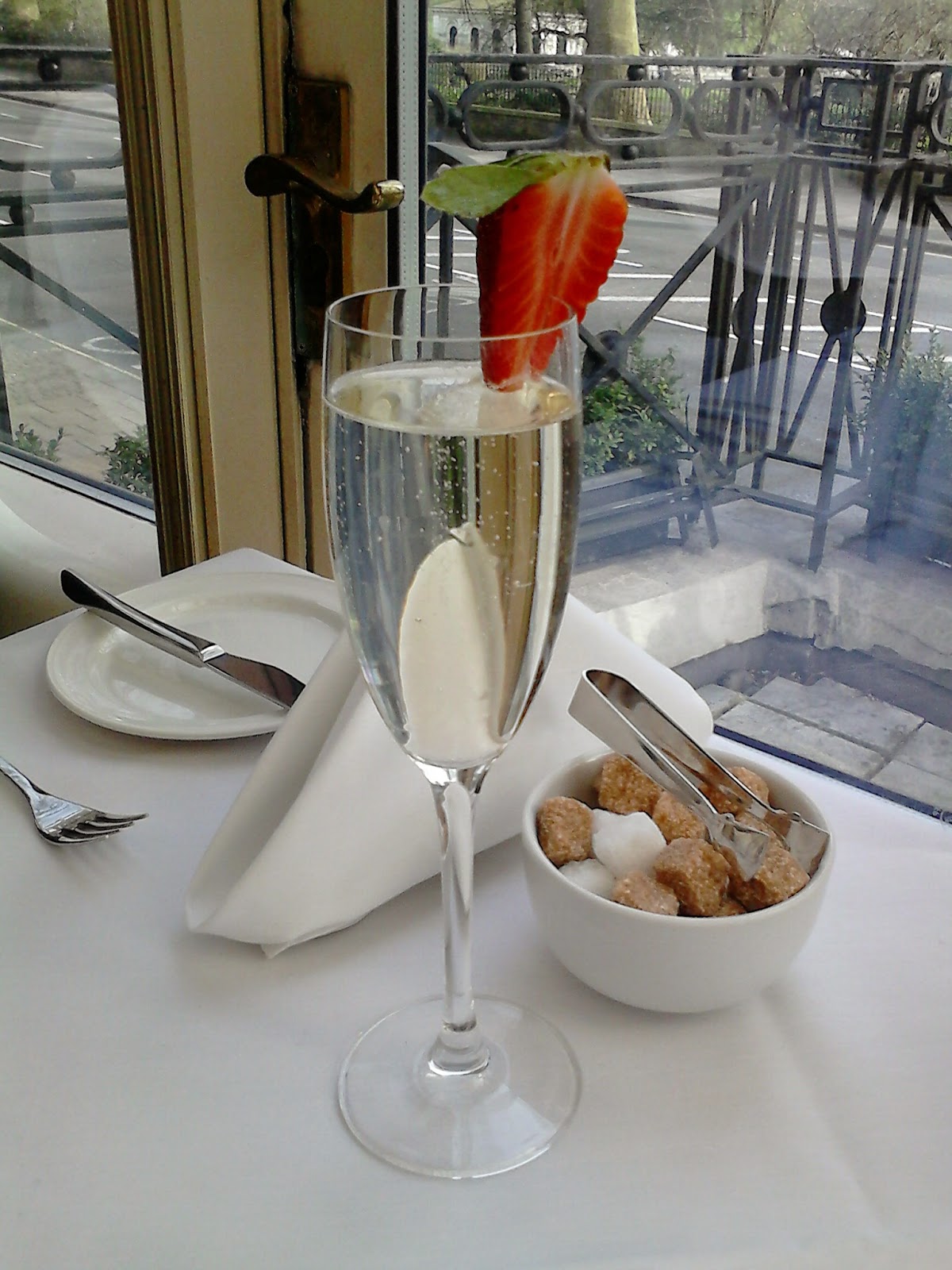 The tea, which also took a long time to arrive, was not done well.  The selection was okay - 12 teas on offer, 4 of which were herbal but they had 2 greens and a flowering tea (£1 extra). The pots were small but the inner baskets had been filled with tea leaves, so both my Milk Oolong and Dave's Winchester Breakfast (Assam) were over-brewed.  We asked for pots of hot water but couldn't save the tea, which was unfortunate, as the initial taste had been good. 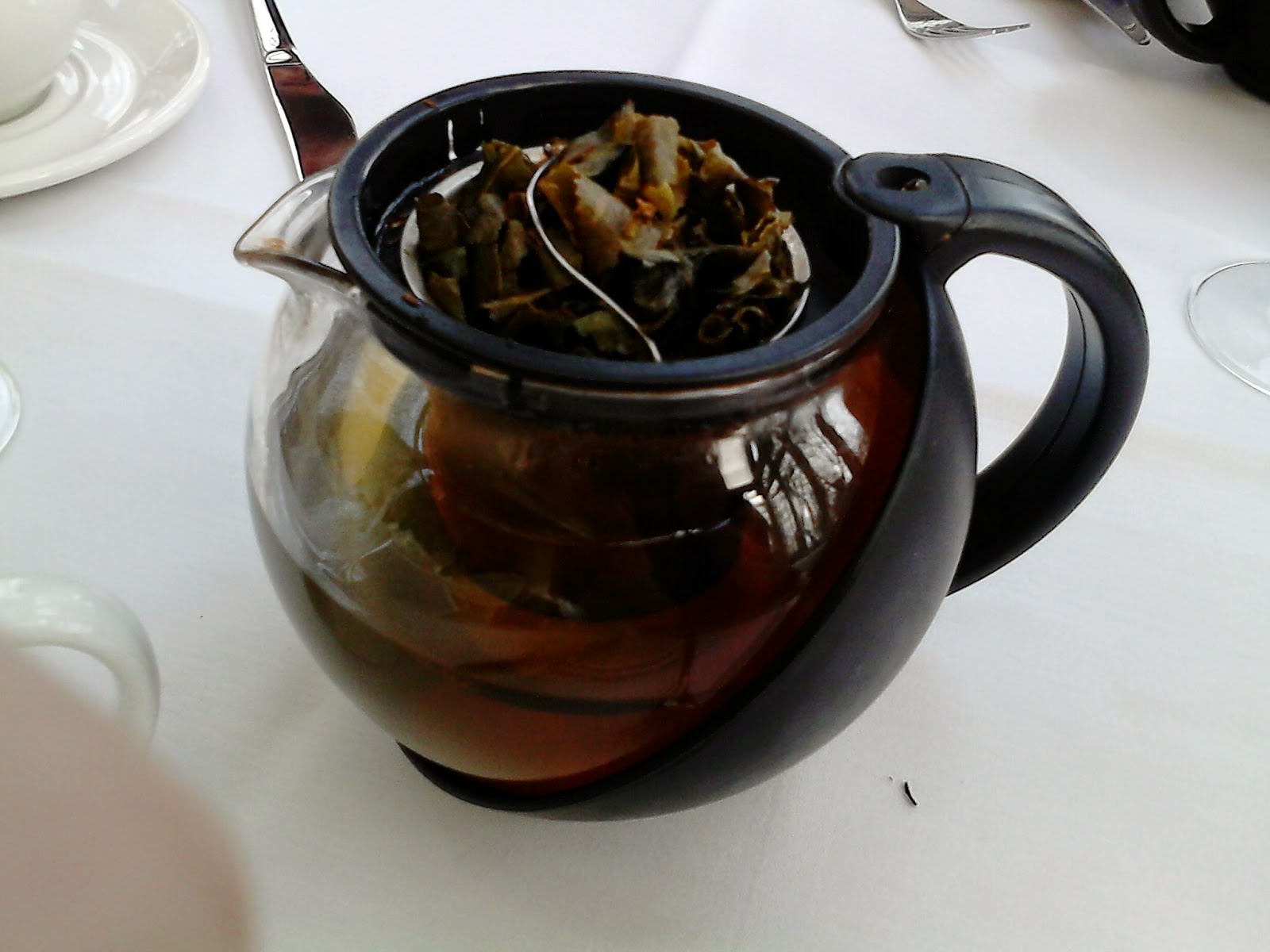 When the correct sandwiches arrived, we found that the food on the whole was good.  The sandwiches were Cucumber, Smoked Salmon and Cream Cheese, and Ham and Mustard on either white or brown bread.  They were well filled and the smoked salmon was in good proportion to the cheese.  There were 9 between us, followed by two plain scones each, and a variety of cakes: a strawberry tart; French Fancies; a plain meringue with strawberry decoration; and individual carrot cakes with buttercream filling. 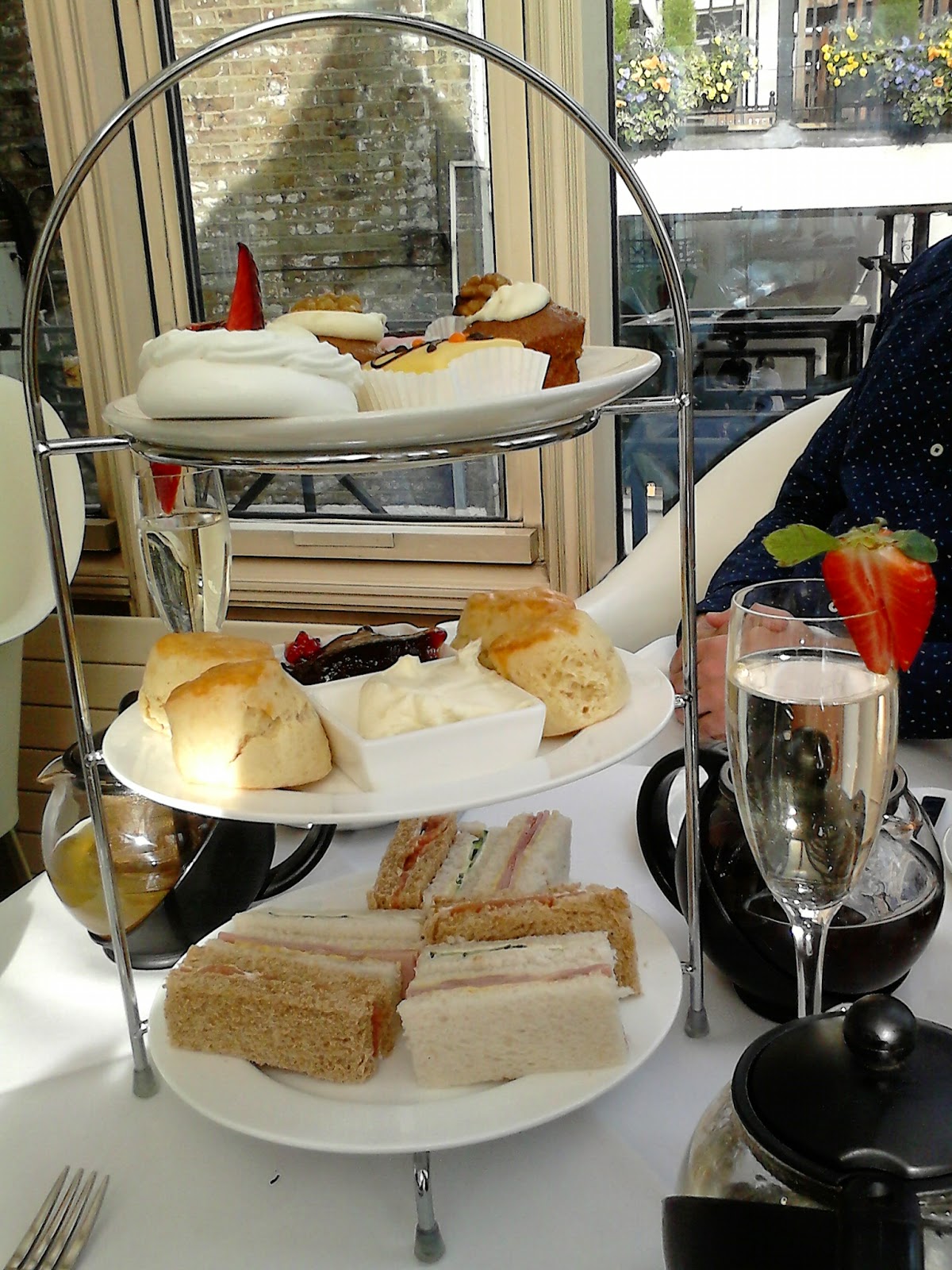 We enjoyed most of this, our only complaint being that some of it had clearly been left out for too long - some of the bread on the sandwiches had gone dry, and the 'fresh' strawberry on the macaron had seen better days.  The cakes were definitely the best part though, clearly home made, and very well done, we particularly liked the layers in the French Fancies: 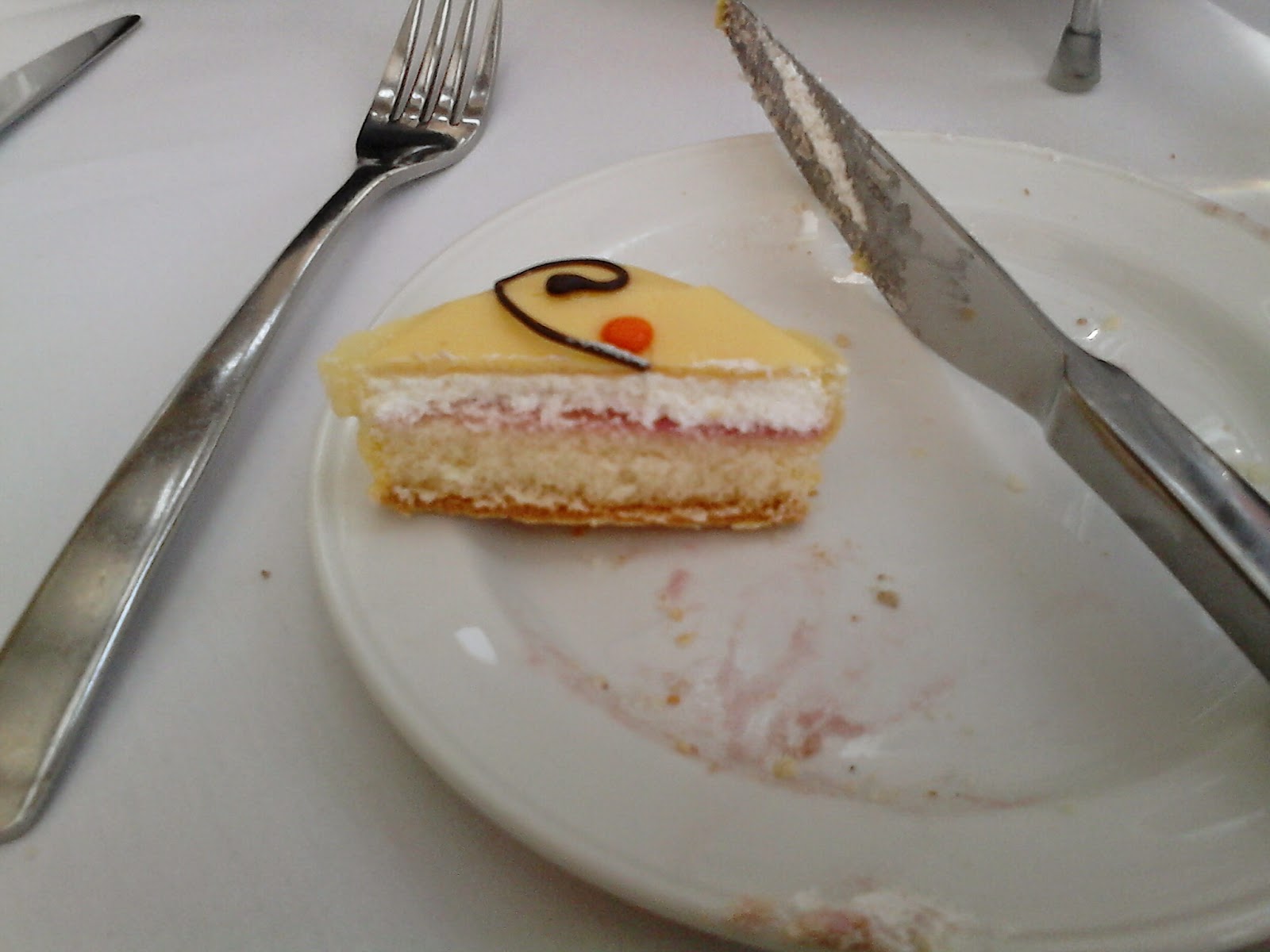 Although we could have as much tea as we wanted, top-ups of the food cost extra, but we actually found that they had provided a good quantity for us and we didn't need anything more.
All in all, this was a decent afternoon tea, which was let down by poor service.  As well as the food taking a long time to arrive and the badly-brewed tea, we could hear staff arguing in the kitchen, another customer complaining about their order being wrong, and we were isolated from the rest of the restaurant, so couldn't even see the staff let alone get their attention.  I wouldn't pay full price for this and I'd really have to think twice even to buy it at a discount - there are so many places that do a comparable afternoon tea, and this hotel really doesn't have much to recommend it over any other.  I'd give it a 5/10 (6/10 if they sorted their service out).