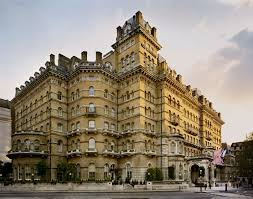 The Langham claims to be the place where “the tradition of afternoon tea was born over 140 years ago”, so as a traditional place to take afternoon tea in London, you can’t get much better.

The Palm Court, where tea is served, is a beautiful room that evokes all the elegance and gentility that you’d expect. We were sat at a well-sized table on comfortable seats. They had a piano player providing some nice ambience though on occasion the piano was a little louder than we would have liked but on the whole the airy space, elegant surroundings, and background music made for the perfect afternoon tea environment. We went for the Wonderland tea at £40 a head (though it has since risen to £44 each).

There were over 40 teas available, including a good selection of green, white and herbal teas. There was a yellow tea on offer which isn't often seen, though at a surcharge of £19.50 none of us were keen enough to choose it. We were all tempted by the Tregothnan teas but in the end Charlotte chose the Anji Green, Caroline chose The Langham Blend, Mo chose the Darjeeling and Sandhir (our honorary tealady for the day), the Chai. The staff were very attentive and good at giving more hot water or fresh tea without being intrusive. Whilst the Langham blend wasn’t entirely to Caroline’s taste, it was still of a good quality and Charlotte’s green tea was the best brewed green we’d seen for a long time. We agreed that this was one of the best afternoon teas we’ve had for tea selection and knowing how to brew and serve their teas. 27/30

There were five different types of sandwiches: crab and prawn, egg mayonnaise, roast beef, smoked salmon with whipped brie, and coronation chicken - all with different types of bread. We weren’t fond of the smoked salmon with the brie, as the flavours didn’t work for us but all the others were very nice. We were a little disappointed at the lack of  traditional cucumber  sandwiches but we were offered refills and could specify which sandwiches we wanted more of. 26.5/30 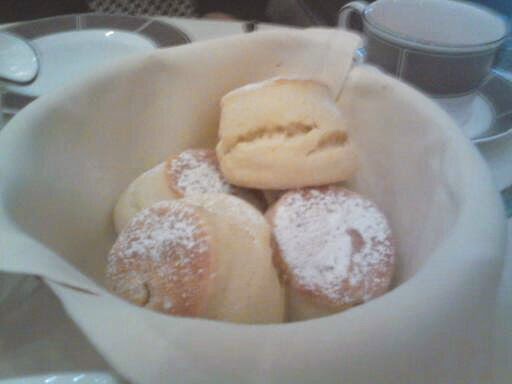 The scones were the highlight of a very high-scoring tea. We had two each, one plain and one fruit, and we were offered refills. They were a good size and they came with the usual strawberry jam and clotted cream. They were the best scones that we’ve yet had – light, not too doughy and nicely warm. 28/30

The selection of cakes was the low-point of this tea, though as it was excellent overall, the cakes were still of a very high quality. We were served a lime posset, a passion fruit and mango dome, a chocolate tart, a lemon and poppy seed cake, and an Eton mess push pop. The push pop was very pretty but difficult to eat as it was on the liquid end of mousse. It felt like a gimmick and not one that particularly came off. The chocolate tart was very rich but tasty and the lemon and poppy seed cake full of flavour but a bit stodgy. The passion fruit and mango dome was attractive with some glitter on the top and had some nice strong sharp flavours. The lime posset was our winner from the selection as it was lovely and citrussy and it’s rare that we see a posset on the menu. As a selection we thought it was a bit limited as there were three mousse-like  desserts and no pastry offering like an éclair or biscuit to provide some different textures. 22/30

The service was excellent: attentive but not pushy; although we would have liked a little more explanation of all the cakes.  We did wonder at the naming of the Wonderland tea, as there didn’t seem to be any connection to Alice in Wonderland, or any attempt to make this a themed tea. Overall though, this was one of the best afternoon teas that we’ve been to. We were so busy enjoying it, we forgot to take many photos to show you.  Even though the price of the tea has increased, we still think that it’s good value for money for a special occasion, considering the refills and the quality.