Afternoon Tea Review - Hotel Indigo, London - £11 (with a voucher) for Afternoon Tea with a Molecular Cocktail 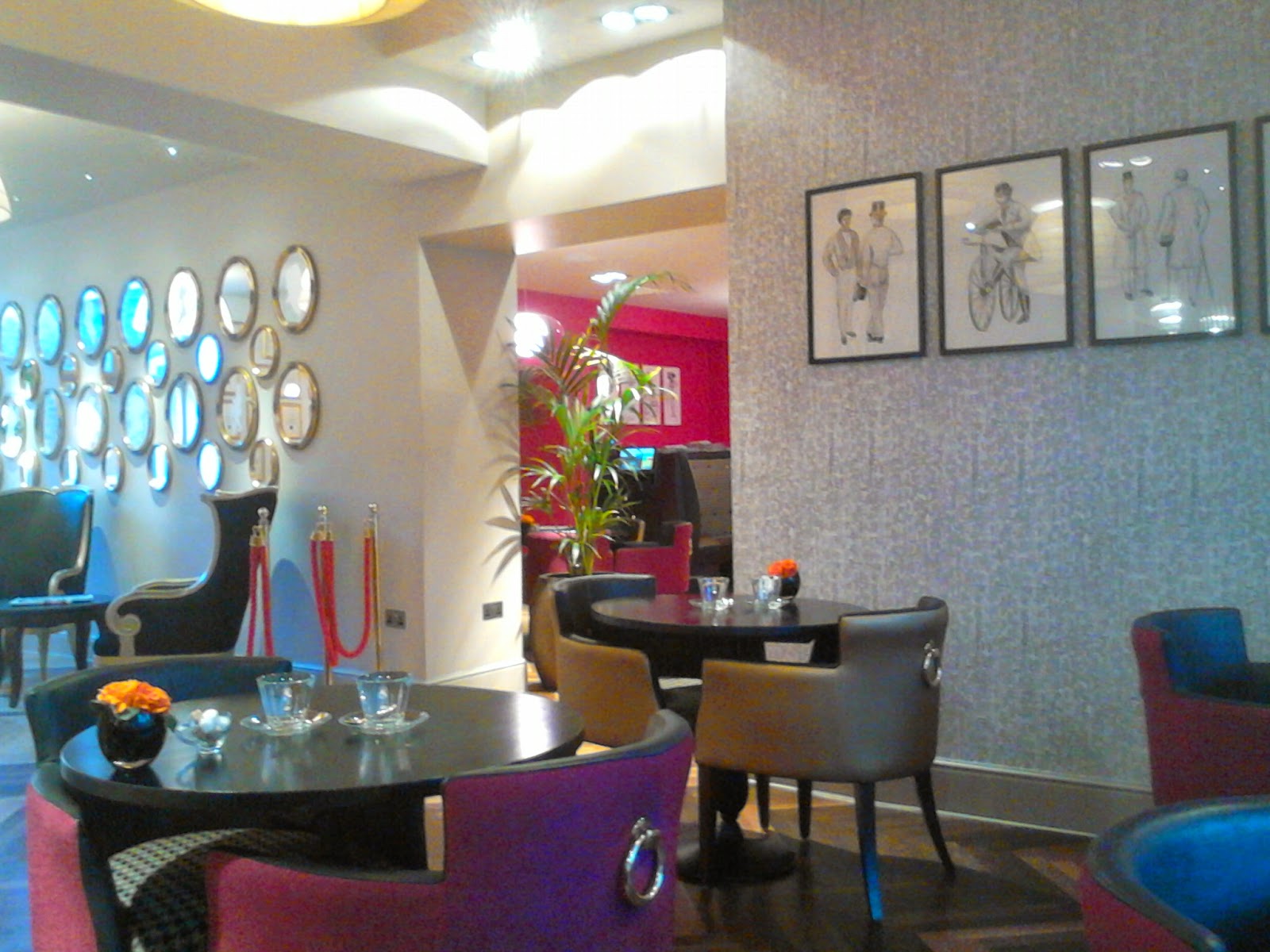 Hotel Indigo is a short walk from Earl's Court tube.  It's a boutique hotel and, somewhat bizzarely, all of its staff are Lords and Ladies.  After a refurbishment in 2012, it re-launched with an employee package that included titles for all the staff.  In 2013, the Mansion Bar and Parlour was then opened serving molecular cocktails.  We went there in February for an afternoon tea with added cocktail.
There was an interesting, but not large selection of teas.  Green, white, rooibos and herbal were all on offer, but surprisingly not many varieties of black tea.  Caroline chose the English Breakfast, Mo the Earl Grey, honorary tea lady Dave had Lapsang Souchong and Charlotte had the Organic Fog green tea.  We all liked our teas, however, there were a few problems.  Hotel Indigo generally seems to be a very stylised boutique hotel, and as such the afternoon tea had elements of that style.  The milk came in bottles more usually used for home-brewed alcohol - we have no idea why as nothing else had this kind of feel.  The teapots were very decorative but impractical - the lids didn't stay on properly and there was only enough space for a cup's worth of water.  Although we got more hot water when we asked for it, we all left feeling like we hadn't had enough tea.  In addition, the tea had been made badly.  There were far too many leaves in the pot, so the tea was far too strong, even with the extra hot water. 19/30 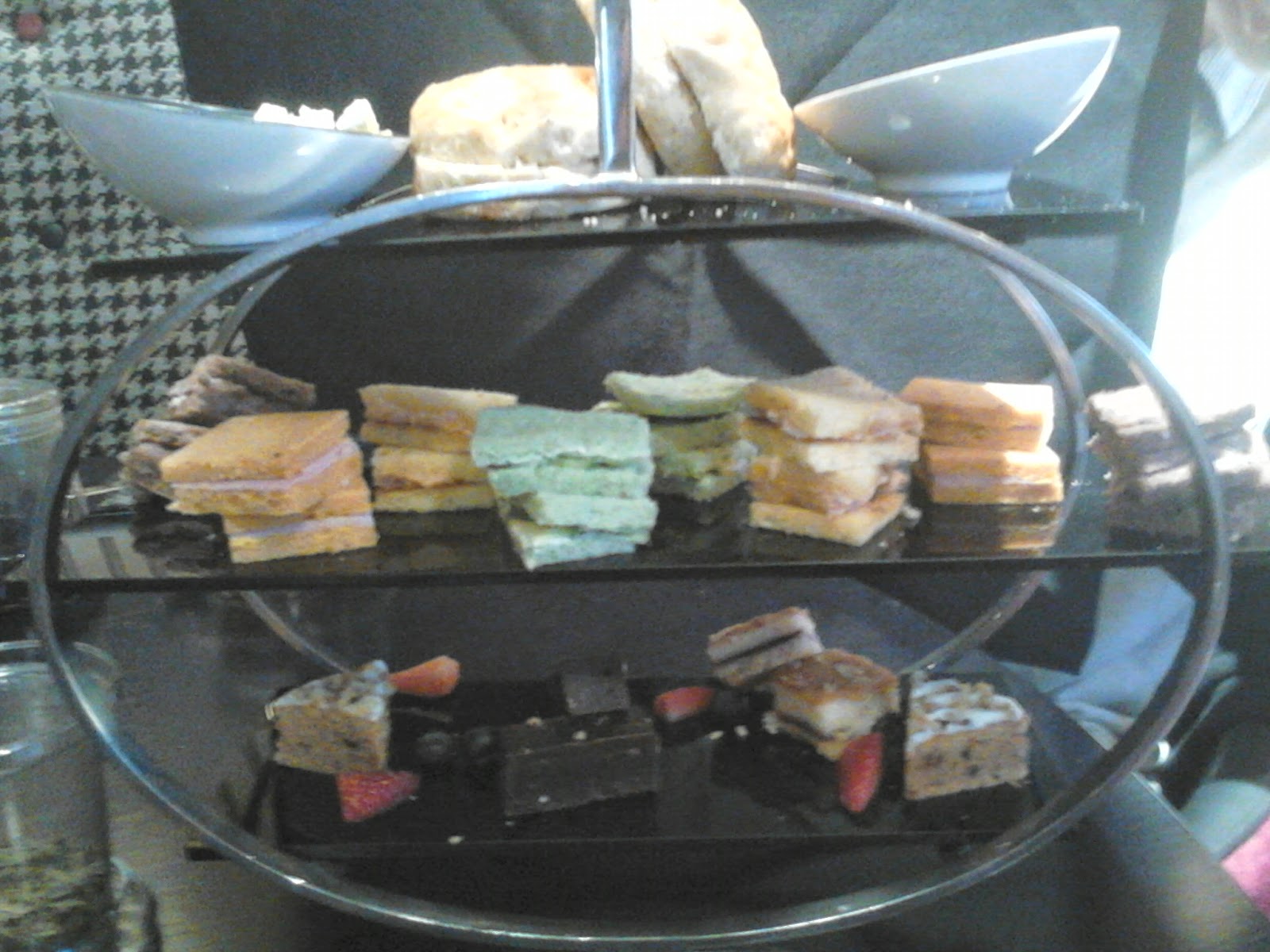 The cake stand was very attractive and a bit more practical than the teapots.  In keeping with the stylish theme, the sandwiches were all cut into small squares and had breads of different colours to make them stand out.  We had beef brisket and horseradish on chocolate bread, ham and mustard on tomato bread, salmon on lemon bread and cucumber and cream cheese on basil bread.  The fillings were sparse, the sandwiches were small in general, and some of the bread had gone dry and curly so they'd clearly been standing around for a while.  We also found the combinations odd and badly done.  The basil bread just tasted sour, there was candied peel in the lemon bread which didn't go with the smoked salmon and the chocolate bread didn't work with the beef.  14/30
The scones were a decent size but there was only one per person, either fruit or plain.  The texture was unpleasantly doughy and they had clearly been microwaved to warm them up.  The jam had obviously been scooped out of the small cartons from the hotel breakfast as it was still in that shape.  The cream was just out of the fridge, so impossible to spread.  13/30
The cakes were supermarket tray bakes, or possibly Mr Kipling's.  They were 3 small selections - carrot, almond shortcake and chocolate (possibly a brownie, hard to tell).  They were exactly what you'd expect from mass-produced tray bakes - dry and poor quality.  Considering how much effort they'd gone to with the sandwiches and the look of the afternoon tea, we found it very strange that they'd done this for the cake course.  8/30
The molecular cocktail was served at the end and was generally liked, although it didn't really add anything to the tea. 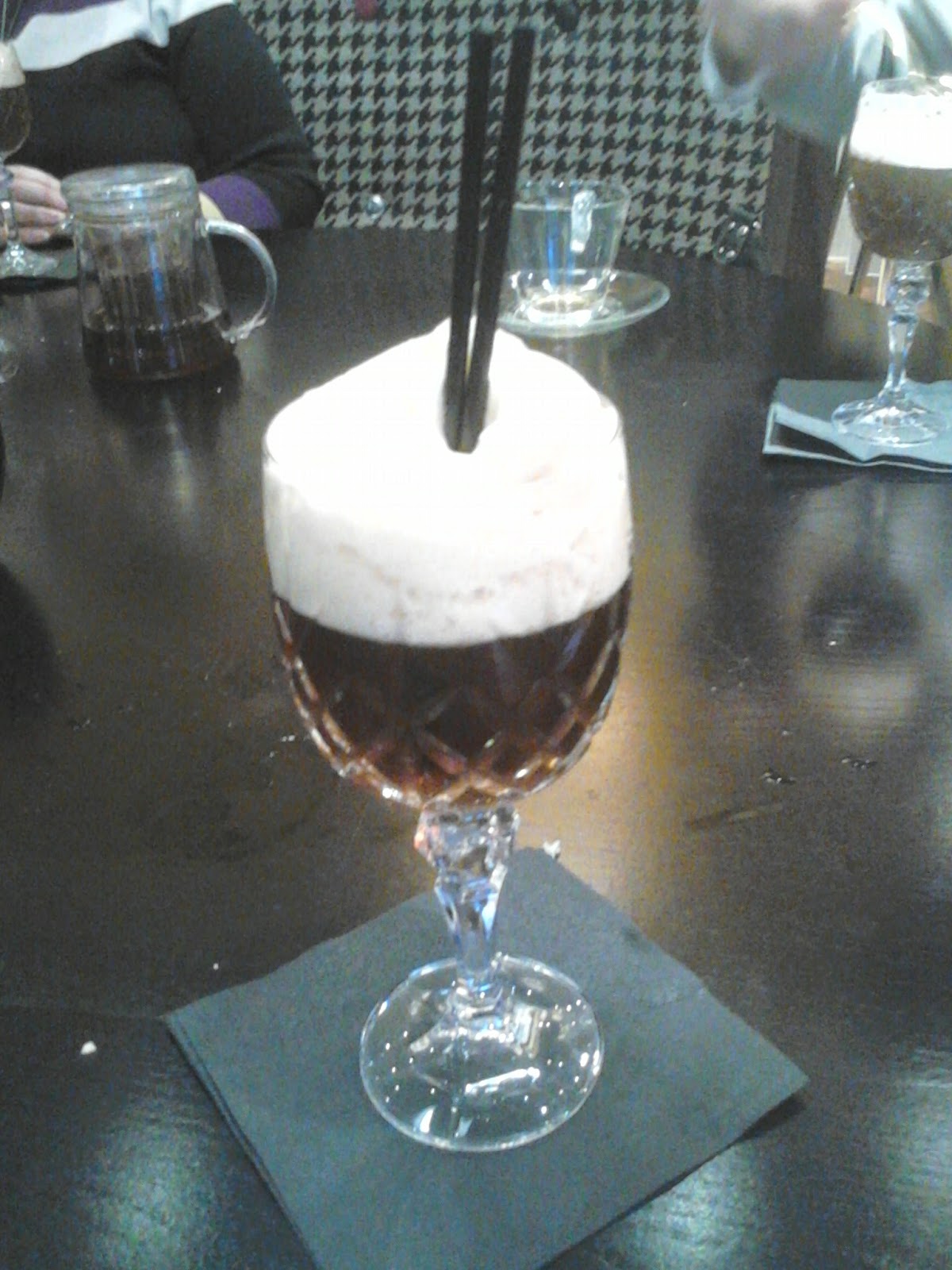