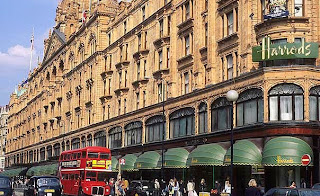 Harrods at Christmas is a tradition – The food hall, the toy department,  the amazing window decorations, the crowds…  So the Tea ladies decided they would go there for afternoon tea  for a Christmas treat.

Tea is served in the Georgian restaurant on the 4th floor which is next to another restaurant and just beside the Disney shop which didn't make for a relaxed approach.  It’s a large restaurant with a (rather loud) pianist at one end and, at this time of year a huge Christmas tree in the middle of the room.  It was busy with families and the acoustics are such that we found it very noisy and not very relaxing.  Perhaps it’s not so frantic outside the Christmas period.  On first glance, the restaurant looked nice but on closer inspection everything was a bit shabby, the chairs needed re-stuffing and there were several areas that could have done with re-painting. 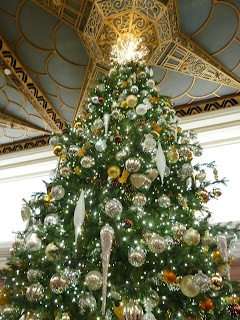 There were eleven teas on offer –  rather a poor show we thought, especially as the Food Hall sells many more than that. Mo had St James Orange Pekoe, Caroline Georgian Blend and Charlotte had Idulgashinna, a pure green tea.  All were served in silver teapots and all were too strong.  The two black teas were fine to begin with but the green was far too strong and tasted quite bitter.  When Charlotte added more water it turned they had given her enough tealeaves for about four pots.  We were offered refills and got hot water on request but otherwise it only warrants   21/30

The sandwich selection was good - lobster roll, turkey with mustard, smoked salmon with spinach and cream cheese, cucumber and cream cheese, and egg mayonnaise and we were able to have refills.  The turkey and the salmon were particularly good and the breads were nice and varied.  27/30
The scones were huge, two each - one fruit, one plain, served with clotted cream, strawberry jam and rose jelly.  They were warm when they were brought but not by the time we got to them.  They were a little dry and because of their size we could only manage one each.   23/30
There was a decent variety of cakes: a tiny mince pie, a chocolate hazelnut delice, a mille-feuille, a miniature lemon meringue tart and a raspberry macaron each.  They looked very pretty and were all quite small and dainty.  The macaron was not great – it had a soggy bottom!   The rest were good and we could have had more if we'd wanted.  No trolley selection here like some other places but it wasn't really necessary.   24/30 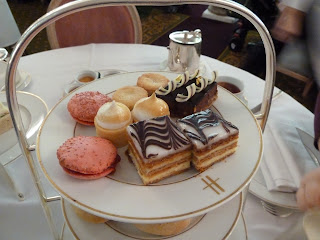 The service was pleasant but a little vague.  We weren’t offered the option of champagne, one of the waiters was confused by the request for hot water and they were hard to flag down.  They also clearly didn't know how to make a pot of tea.
Overall, the experience was disappointing.  The ambience was more of a noisy café in a department store than a calm sophisticated afternoon tea.  And the loos were a long way away!  Value for money?  Not really - plenty of food but we didn't feel inclined to linger