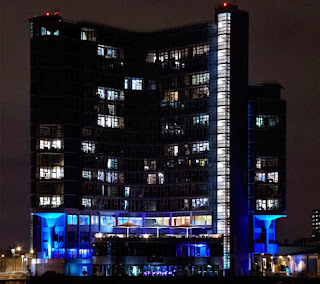 The Hotel Rafayel is situated alongside the River Thames and the  restaurant on the ground floor is next to the river so it's a lovely setting for afternoon tea on a nice summer day.  Being in Battersea though, means it's not that easy to get to.  Also, there is a helipad a few yards away, so the afternoon was occasionally interrupted by the noise of a helicopter landing or taking off.
We usually don't go to themed afternoon teas as we prefer to review places based on the quality of their traditional afternoon tea.  However, there are so many themed teas around that we thought it was about time we tried one, and a chocolate afternoon tea seemed like a good place to start.  We had a discount voucher and invited honorary tea lady Rebecca to join us and make the tealadies a nice even four. 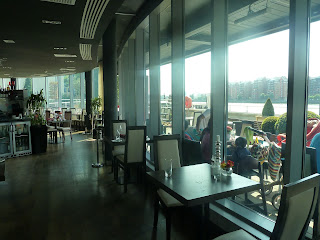 We arrived and were seated at a table next to the window, looking out over the river.  The chocoholics afternoon tea includes a choice of chocolate martini or a glass of prosecco.  In keeping with the theme, we all chose the chocolate martini.  Unfortunately, this turned out to be a coffee martini.  Two of us can't stand coffee so had to swap it for the prosecco.  The two of us that do like coffee, ended up wishing they'd had the prosecco, as the martinis were unbearably sweet and didn't taste remotely of chocolate. 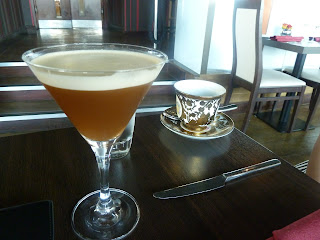 The teas were from the London Tea Company, which we've had several times before.  Mo had the Assam, Charlotte had the White Tea with Elderflower and Apricot, Caroline had the Rooibos with Nutmeg and Vanilla, and Rebecca had the English Breakfast.  They were all tea bags, nice but great, and we got a pot of hot water when we asked.  However, getting the tea took some time.  For some reason, possibly because we already had cocktails, we weren't given the tea menus immediately.  We eventually asked for them but then had to wait for some time before the waitress came back to take our order.  Due to the small size of the table, we ended up balancing the menus on our laps while we were eating our sandwiches.  We didn't actually get our teas until we had started on the scones, which none of us were very happy about. 20/30

The sandwiches were less dainty and more doorstop.  There were four different ones with either brown or white bread: chicken mayonnaise; smoked salmon and dill; ham and mustard; and cucumber and cream cheese.  The fillings were all good but the bread was cut extremely thickly.  The sandwiches were presented on a separate plate rather than on the cake stand, probably because they wouldn't have been able to fit on one.  There were no refills but due to the size of the sandwiches, quantity wasn't really an issue.  18/30 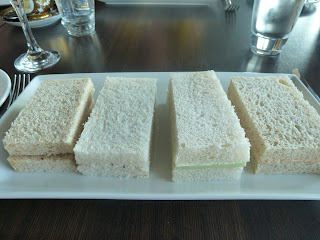 The scones were medium sized and there was one fruit and one plain per person.  According to the menu, they came with cream and a 'selection of jams or chocolate praline spread'.  Our scones came with cream and strawberry jam.  For a chocoholics afternoon tea, so far there had been a surprising lack of chocolate.  The scones themselves were fairly average in taste and texture, fine but nothing special.  The jam was also fine, and we got more cream when we asked for it.  22/30
Again according to the menu, the cake stand 'overflows with chocolate goodies such as homemade cakes and miniature chocolate fancies'.  We had one chocolate macaron.  Between four of us.  There were also large slices of carrot cake and a creamy lemon gateau, as well as pistachio and coffee macarons and some miniature tarts with and indistinguishable filling, possibly something fruity.  They were all fairly good in quality, although the selection was poor and the appearance could have been better.  Our main issue was the lack of chocolate.  18/30 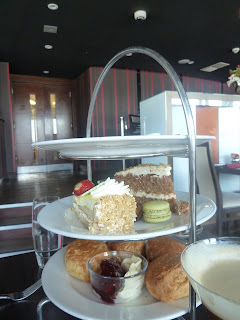 This particular afternoon tea had a fourth course, which was a chocolate fondue with strawberries and marshmallows to dip in it.  This was easily the best part of the meal, although there were also a few problems here.  Firstly, the chocolate was very strong and dark so if you don't like dark chocolate (which Rebecca doesn't), this wouldn't be very pleasant.  Secondly, it meant there were 3 sweet courses to one savoury.  Thirdly, afternoon tea really doesn't need to have a fourth course.  Sandwiches, scones and cakes are all very filling, so adding a fourth course means there's far too much food.  We left several of the scones, and the hotel gave us boxes to take home some of the cakes we couldn't manage to eat, which was great but not really the point of an afternoon tea.

Overall, this was a disappointing experience.  We expected a lot more from a 'chocoholics' themed tea, especially considering the descriptions on the menu.  Apart from one chocolate macaron and the chocolate fondue, there was no chocolate in this tea.  The chocolate martini was a misnomer, the chocolate and praline spread for the scones was invisible and there wasn't even a slice of chocolate cake.  In addition to this, the service was friendly but erratic, we had to wait ages for our tea and the menu advertised the standard price as £35 for two, which made our discount voucher completely pointless.


On the plus side, the food was decent quality, the lemon and carrot cakes in particular were very nice.  Also, the quantity of food we received, as well as the martini/prosecco, definitely gave us value for money.  So, if you are thinking of going for this particular tea, go for the prosecco, don't expect much chocolate, and remember you can take some of the food away with you.

Honorary Tea Lady Dave chose to go to the Park Lane Hotel for his birthday afternoon tea.  Tea is taken in the Palm Court, a lobby area with sofas and a bar, just past the reception.  It is a cosy, nicely decorated area and the comings and goings of the hotel guests was barely noticeable.  The seating, however, was a little awkward and designed for comfort rather than eating a meal - we had a sofa for 2, an armchair and  a pouffe.  There were only a couple of tables to sit up at, so if you're going there with someone elderly make sure you get one of these.

They had a good range of teas, which included everything we'd expect to see on a tea menu - green, white, oolong, flowering teas, herbal teas, rooibos and a good variety of black teas. Caroline had the Ceylon, Charlotte the Organic Silver Needle White Tea, Mo the Russian Caravan, and Dave the Assam.  The tea was poured for us, and although it was loose leaf, they only used two tea strainers between the four of us, which none of us were very happy about.  The quality was generally good, although the White tea was disappointing as it tasted of Jasmine, which the menu hadn't indicated.  We were given extra hot water and refills when we asked.  24/30 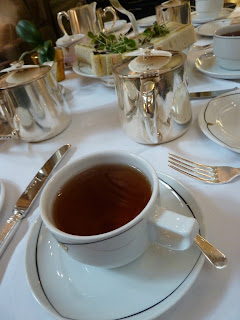 The sandwiches were an interesting range of crab and cucumber, coronation smoked chicken and watercress, roast beef with wasabi,  roasted and smoked salmon on pesto bread, egg and crème fraiche on carrot and herb bread and there was a vegetarian option available if needed.  We were a little disappointed that a couple of the fillings were a bit meagre, but they were generally good quality, we liked the variety in breads, and we were given refills.  26/30
The scones were served warm with cream and a choice of lemon curd, blueberry jam and raspberry jam.  There were two small scones per person, one fruit and one plain.  The quality was fine, nothing outstanding.  The jams and lemon curd were good though.  23.5/30 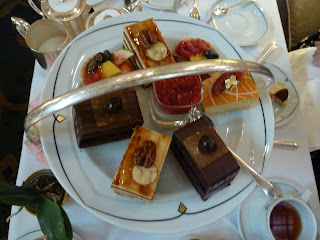 For the cakes, we could choose two from a selection of five: a fruit tart, a raspberry panacotta, banana and white chocolate layer cake, a chocolate rum mousse cake and a mango cream slice.  They were beautifully presented and very good quality.  There was also a nice variety in the types of cakes and definitely something to please everyone.  It was a bit disappointing only being able to choose two, but they were a nice size and definitely very tasty.  24/30
The service at the Park Lane Hotel was just right, attentive and friendly without being intrusive.  We weren't rushed at all and spent a leisurely time enjoying the occasion and the food.  The atmosphere and surroundings were lovely, we all enjoyed our time and felt we would be happy to go back.  At £33 per person, this isn't by any means the most expensive tea we've had and we think that the quality was definitely worth the price for a special occasion.