We were excited about going to The Ritz.  It’s one of the special ones in the afternoon tea world. Tea at the Ritz has a ring to it. It’s an institution.

However, because it’s so popular they have “sittings” and we could only get a booking in the morning 11.30 and had to be out by 1pm.

The setting is beautiful, lots of gilt and mirrors and a harpist (though the menu gave a detailed description of a pianist who would be playing!).  It is a surprisingly small room though, considering how popular their afternoon tea is, which probably contributes to their need for timed sittings. 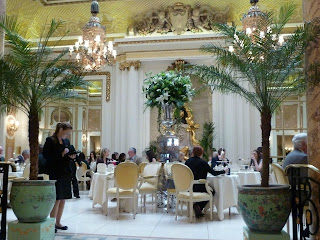 The Ritz offers 16 teas – a reasonable range but a little disappointing considering some of the other high-end places we've been to.  Mo had Earl Grey, Caroline Russian Caravan, Charlotte, Green and honorary tea lady Dave had Darjeeling. All were well brewed and came in silver plate teapots with plenty of hot water to top up.  However, the teapots were not very clean, there were visible stains and there was no offer of fresh tea at any point.  23/30 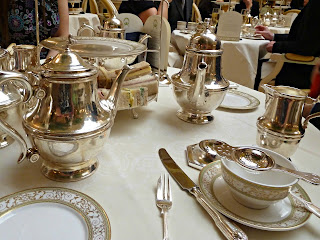 We were brought a 3 tier cake stand with sandwiches and small cakes on the top which looked a little odd.  The scones were brought separately to keep them warm. The sandwiches were mostly good and we could have refills if we wanted.  The selection was ham, cheese, cucumber, chicken, smoked salmon and egg mayonnaise – all the ones we would expect and on varied breads.  The ham was particularly nice.  However, attention to detail was a little lacking (one still has a bit of crust on!). 28/30

The scones, though warm arrived while we were eating our sandwiches, which meant they weren't that warm by the time we started on them.  There were two per person, one fruit and one plain,  with strawberry jam  and plenty of clotted cream. 22/30

There was a small quantity of cakes on the top tier of the cake stand.  They all looked very appetising and in addition we could choose a slice of cake from the cake trolley.  The waiter with the trolley insisted on our choosing these cakes even though we had only just started our scones and looked disgruntled when we asked him to come back, so we had to choose far earlier than we'd have liked.  The cakes from the trolley were good and varied, but it was all rather  rushed.    There was a banana passion fruit dessert that divided opinion!

We weren't offered refills of the cakes or scones at any point, possibly because it was coming close to the end of our sitting and the waiting staff were obviously trying to hurry us up.  21/30 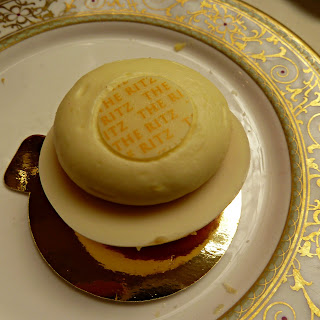 The time constraint really seemed to affect the service which at times as a little obtrusive bordering on pushy.   We were constantly being hurried - our scones were brought too early, we had to choose our cakes just as we'd started on the scones - it wasn't at all a leisurely occasion and felt more like we were part of a conveyor belt.

In addition, the details let them down.  Crust left on, teapots with stains, our table was wobbly, and, although that was sorted out for us it still added to the lightly shoddy feel.  Men must wear a jacket and it was very warm so Dave, our honorary tea lady felt rather uncomfortable.  At the end of our time, as we waited to pay, a large crowd was gathering at the foot of the steps leading to the tea room, waiting for the next session, which meant we were being watched as we finished our meal.  Also there are only 3 cubicles in the (very lovely) ladies’ toilets, which meant that we were delayed paying the bill as Caroline got stuck in the queue for nearly 15 minutes.  This may seem nit picking and petty but it IS the Ritz and we expected better.  The setting is lovely and it is nice to be able to say “Tea at the Ritz” but it falls short of the high standards it claims for itself and it is necessary to point that out.

On the whole, we were disappointed.  We expected better and we didn't feel the Ritz offered value for money.  We feel that you are paying more for the name than for the experience itself, so although it is nice to say we've had tea at the Ritz, we wouldn't choose to go back there.

Posted by Afternoon Tea Ladies at 16:33

Email ThisBlogThis!Share to TwitterShare to FacebookShare to Pinterest
Labels: afternoon tea, Ritz, tea at the Ritz, The Ritz