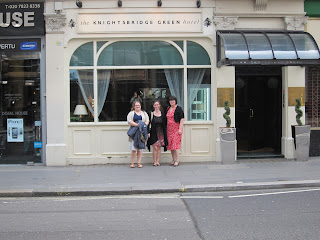 The Knightsbridge Hotel is situated, as the name suggests, in the centre of Knightsbridge, close to Harrods and Hyde Park.  It is a small boutique hotel and would be quite easy to miss if you were just walking past, which is possibly why they decided to put their afternoon tea area in the small ground floor room at the front, with a large window looking onto the street.  This is presumably quite good advertising for them.  However, our problem with this was that the room seemed to be nowhere near the kitchen, or in fact anything else.  The reception was further down the hall, the toilets were on the second floor, and halfway through the meal the waitress vanished and we never found her again, despite Caroline going and looking for her.

At the start, we were met by a waitress, seated and given glasses of Prosecco.  The tea menu was Twinings, a fairly standard selection although we were a bit bemused to see Ceylon listed under White teas.  Mo chose the Earl Grey, Caroline had Darjeeling and Charlotte chose the Green tea.  The teas were as you would expect, decent but nothing special.  The teapots were quite small though and when we needed more hot water we couldn't find the waitress.  19/30 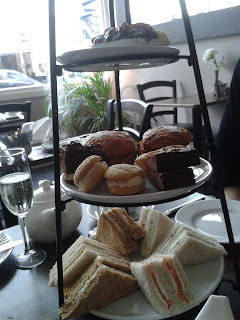 The cake stands arrived promptly with a selection of sandwiches, cakes and scones.  The sandwiches were triangles of egg, cucumber and cream cheese and ham, cheese and mustard.  However, we had initally been asked if anyone had any allergies or dietary requirements and because Charlotte doesn't eat red meat, she was given smoked salmon sandwiches instead of ham and cheese.  These were very nice but caused a certain amount of jealousy.  We were also a bit puzzled as to why, if smoked salmon was available, they didn't provide it automatically as it's a much more traditional sandwich for an afternoon tea, especially when this was supposed to be a 'luxury' one.  For the other sandwiches, the egg was fine, the cucumber was drowned by the cream cheese, and the ham and cheese fillings were very meagre.  The bread was either brown or white, but clearly pre-sliced shop bought.  13/30

We were given one medium-sized scone per person.  There was some disagreement over whether these were fruit or plain.  Caroline and Charlotte definitely had plain ones but Mo swore she found a raisin in hers.  The scones may once have been nice but for some reason the chef had felt the need to toast them (possibly to disguise staleness?) So they were still hot even after we'd eaten the sandwiches, causing the cream to melt.  They were also crunchy.  Distinctly unpleasant.  In addition, the cream was very poor quality, yellow in appearance and slightly grainy in texture.  11/30 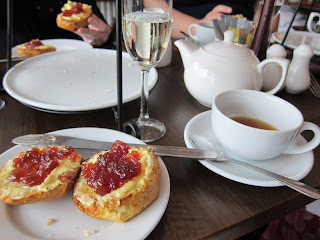 The cakes were a small petit-four style selection: a round sponge with cream inside, which we initially thought was a macaroon, this was unfortunately the best one; a chocolate brownie which was dry, not particularly chocolatey and burnt on the bottom; a layered tiramisu gateau which was unremarkable; and an eclair which was stale, dry and awful.  11/30 (only because the quantity was acceptable)
From the outside, the hotel looks nice but the room we were in was small and unimpressive.  It felt more like the breakfast area in a B&B, not the afternoon tea area of a Knightsbridge hotel.  What we had of waitress service was fine but not being able to find the waitress, even when you leave the room and go looking for her, is ridiculous.  We were there in total less than an hour as we didn't want to stay.  This wasn't even value for money at £13 per person, we would rather have gone to somewhere like Paul's for a cup of tea and a cake as it would have been better.  If we had paid full price for this, we would have been complaining loudly to any member of staff we could actually find.  A meal is not 'luxury' simply because you include a glass of Prosecco, and this was nothing like luxury.  This is clearly a hotel that is trying to cash in on the trend for afternoon teas.  We advise you to stay well away.