It was Caroline's birthday, so she got to choose the venue for afternoon tea and her choice was The Savoy Hotel. 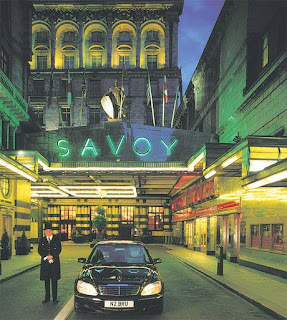 Afternoon tea is served in the Thames Foyer which is a large light room with a domed ceiling that lets in a lot of light giving it an airy feel. Right in the middle of the room is a piano and we had a pianist providing some background music throughout the afternoon. 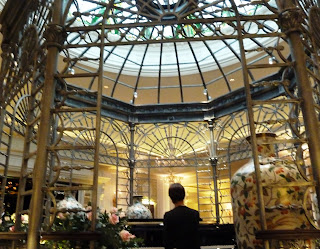 There was a large range of tea to choose from.  Mo chose the Ceylon; Caroline chose the Savoy Afternoon blend and Charlotte had the Yellow tea, which is not often seen on tea menus and is similar to green tea.  We were all pleased with our choices, and the pots were constantly topped up and refreshed throughout the meal.  However, the tea came in metal teapots, which, whilst pretty, inevitably became hot and difficult to hold, and which resulted in the tea cooling down quite quickly.  Also, our table was too small to hold the teapots, so they were placed on a stand nearby, which meant we couldn't pour them ourselves and had to wait for the waitress to do it.  26/30 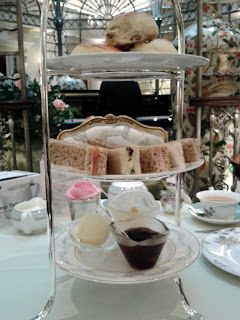 The sandwiches were smoked salmon, egg and "shiso cress", chicken, cucumber, and ham.  The food was all topped up as often as we wanted, so even though our original serving of sandwiches was small, this wasn't an issue.  We had mixed feelings about the fillings though.  The cucumber tasted mostly of dill, and the addition of lettuce didn't really help the egg sandwich.  The chicken, ham and smoked salmon were fine but not particularly special.  The bread was either brown or white, which showed a disappointing lack of variety. 24/30

The scones were served warm and either fruit or plain.  Again, we could have as many as we liked (although none of us could manage more than two).  They came with cream and either strawberry jam or lemon curd.  They were average scones (a little "cakey") but we liked having the option of the lemon curd as well as the traditional jam and cream, though we had mixed opinions on whether we liked the taste of the lemon curd. 24/30 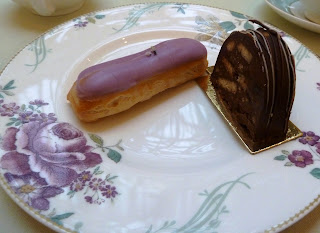 For some reason, the cakes were split into two courses - a selection of pastries, followed by a choice of "signature cake" from the sweet trolley.  There were six different pastries to chose from and there was a good selection, including a lavender eclair, a chocolate and coffee opera cake, raspberry and lime macaroon and a mini strawberry tart.  They were mostly good and this was probably the best course of the four.  After this, Mo and Charlotte both chose a slice of Victoria sponge and Caroline had the fruit cake.  This was the most disappointing part of the afternoon.  The Victoria sponge was particularly bad.  It was very dense, much more the consistency of a lemon drizzle cake or a tea bread.  The fruit cake wasn't good either, and tasted mostly of mixed peel.  As we're scoring both lots of cakes together the disappointing "signature cakes" have brought down the score from the pastries which we enjoyed. 21/30

The atmosphere at The Savoy was pleasant and calm and we were not rushed at all. The room is beautiful and the hotel in general has a sense of elegance and style that fits in well with the tradition of taking afternoon tea.  The service was attentive at first but then rather patchy. We found it a bit confusing that we seemed at first to be encouraged to allow the staff to pour the tea etc for us but then later on those staff were nowhere to be found and we weren't able to serve ourselves. It's also worth noting that an "So are you enjoying yourself? Do you like it?" enquiry from staff is nowhere near as helpful or professional as a "Can I help? Do you require anything further?".

Overall, we found The Savoy was a disappointment.  Admittedly part of our disappointment is due to the high expectations we had. We were expecting it to be excellent but it didn't reach that standard.  It was certainly good, and far better than some of the places we've been to, but it wasn't outstanding. This is a lovely afternoon tea (and Caroline definitely had a lovely birthday tea), but considering the cost (the most expensive tea we've had yet) and thinking of others that we've been to, you may be better off paying less elsewhere.