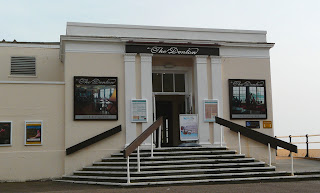 The Afternoon Tea Ladies enjoyed a Day Out to the seaside at the weekend and quite naturally planned to have a spot of tea and cake in the afternoon.  We'd noted a couple of potential tearooms but were not planning on indulging in a full afternoon tea.  That was, of course, until we saw one being advertised at the bargain price of £6.50. What could we do but investigate?

It's easy enough to find cream teas for that price but a full Afternoon Tea with sandwiches, scones, cakes and tea is another kettle of fish so we were delighted to see that our £6.50  included them all.

The Denton Lounge is on the pier in Worthing and has lovely big windows giving you a great view of the pier, the beach and the sea.  We picked a table near the window, perused the menu and then went up to order three afternoon teas.  The ordering took a bit of time as there were lots of details we needed to confirm - type of tea/sandwich/cake -  but the staff were very helpful and enthusiastic.

The teas on offer were the standard selection of Twinings teas that are in many cafes.  Whilst it wasn't the most extensive collection we've seen, it did have black, green and herbal teas on offer. Mo and Caroline chose the English Breakfast, while Charlotte picked the green tea. We got fresh hot water when we asked so there was plenty of tea to go with the food. 19/30 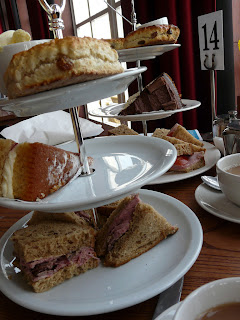 Unlike most of the afternoon teas we've been having in London where you're given a selection of sandwiches and cakes, this was a bit more modest.  We each had to pick a flavour of sandwich from their menu, which was then cut into four triangles for us. If you're going with friends you could mix and match to try a selection if you want. Caroline chose the ham and tomato sandwiches, Mo the topside of beef and Charlotte the prawn mayonnaise. The ham sandwiches were particularly good and the others were ok but nothing special. It was clear that they had been freshly made and the bread was good quality. 19/30

There was only one fruit scone each but as you can see from the photo, it was a large one. They were served with jam (unfortunately the kind in little plastic tubs) and real clotted cream. They were very good and one was plenty due to their size. 20/30 We each chose a slice of cake from the display - Victoria sponge, chocolate and orange, or coffee and walnut. Mo and Charlotte chose the Victoria Sponge and Caroline picked the chocolate cake and we were all given a generous slice.  It's worth noting that The Denton Lounge had several other cake options including cheesecake and a Rocky Road, that all looked amazing, but weren't included in the afternoon tea deal.  However we certainly weren't disappointed with the cakes that we got! By the time we got to the cake course we were so full that we decided to take our cakes with us for later.  Caroline made the mistake of opening her chocolate cake on the train home for a sample only to end up eating the whole thing as it was so moreish.  Mo and Charlotte sensibly lasted at least until they got home and when they did get round to their Victoria Sponges, declared them to be one of the best they've had. 21/30

Overall this was a very good afternoon tea especially considering the cost.  The selection of tea and food was more limited but the quality was as good, and in some cases better than some of the expensive afternoon teas we've had.  The quantity was similarly limited in some ways - we couldn't have asked for more sandwiches for example, but the portions we got were ample and we certainly didn't feel cheated.  Very good value for money, and a lovely setting looking out over Worthing pier to the sea.