On Friday last week the Tea Ladies went for a themed afternoon tea. The Betty Blythe vintage tea room offers a 1920s tea experience with dressing-up box included. An added benefit is the opportunity to bring your own bubbly with a very reasonable £2.20 per person corkage charge. 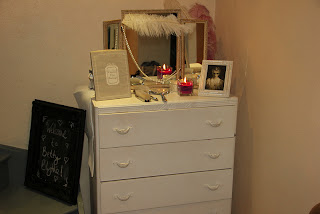 The 1920s tea takes place is downstairs in a small room with no windows, which accomodates about 6 people at most.  This gives your party a certain amount of privacy to dress up and be silly, without feeling self-conscious about who might be watching.

For dressing up there was a wide array of hats, fascinators, gloves, handbags, shawls and beads on offer. The gentleman in our party even had a smoking jacket to wear. There were so many dressing-up options available in fact that we felt the need to swap accessories every 20 mins or so to get the chance to try everything we wanted.


There was a good selection of teas on offer with white, green, black, rooibos and herbal teas all available, although quite a few were flavoured teas which aren’t to everyone’s taste. Caroline chose the Assam ,Mo the Darjeeling, Charlotte chose a green tea called 'The Muse' and Dave, the honorary tea lady chose Bollywood Dream Chai.  We all liked our selections, and were pleased that they were all loose leaf but we were disappointed that we didn't get any information on which companies produced our teas.  We got a top up of water when requested and all felt that we had more than enough tea to keep us going through a couple of hours of dressing up fun. We gave the tea a score of 24/30.

We got one stand of sandwiches between us, which seemed a little measly, especially when we saw the amount given to a party with half the number of people. They had made some effort to use different breads and we got salmon, cucumber and cream cheese, egg mayonnaise and ham sandwiches. Overall we thought they were a little bland and the bread was a bit dry so we scored them a mediocre 16/30.

The sandwiches were followed by a small canapé of smoked salmon on rye bread with a dill sauce. We all found this ok but a bit soggy and it seemed strange as it was just one single canapé each in the midst of all the other courses.

The scones arrived prettily arranged on a plate, already loaded up with cream and jam (see Cream vs Jam). Whilst it was a pretty display we felt that putting the cream and jam on the scone is half the fun, let alone the fact that they’d decided on cream first (which is clearly wrong*). The cream was clotted cream but not the best that we’ve tasted and they were a little stingy with the jam. We were assigned two halves of a scone each and all the scones were plain which in comparison with other places where we’ve had one plain, one fruit scone each was disappointing. We scored them 12/30. 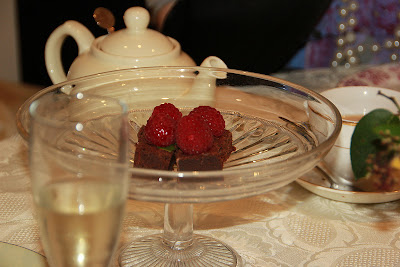 There were three cakes on offer which each came in a little course of their own, brought down by smiling waitresses at regular intervals. The first was a small truffle chocolate brownie square topped with a mint leaf and jam filled raspberry. The majority liked the brownie but weren’t too sure about the topping.


Next was a small orange and coconut cake  (not the promised lemon drizzle on the menu) which we then divided into four. This cake we universally disliked - there was a strange taste of alcohol and washing-up liquid which was rather unpleasant. Last to arrive were some tiny cupcakes. These were nicely decorated and tasted ok but were certainly nothing special. We thought it a shame that there was no variety in the selection - no pastries or biscuits on offer, and we felt that presenting them on a cake stand would have been much more impressive than bringing them to us individually. We gave the cakes a very low score of 11/30.

We got our afternoon tea via Living Social which amounted to a cost of £9 each which is excellent value for money for what we received, even considering our opinion of the food however we wouldn't be so happy paying the full price.

It’s clear from the above that we didn’t rate the food at this tea very highly but we wouldn’t want you to go away thinking that we didn’t have a good time. If this had been a plain afternoon tea where the food and the tea are the central focus of events we would have been very upset, but the fact is that the whole dressing up element was a huge amount of fun and that combined with the Prosecco that we brought along meant that we had an enjoyable couple of hours. If you go to Betty Blythe’s go for the dress-up and the atmosphere - not the food. 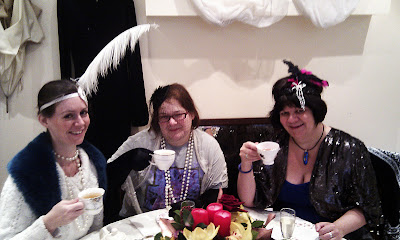