The Cake and Bake Show

As soon as I saw the adverts for this, I wanted to go.  Cake!  And Baking!  Unfortunately Caroline and Mo were busy that weekend, so I was a lone Afternoon Tealady at the evening session on the first day of the show.
I'd looked at the list of exhibitors beforehand, and had a couple of places I definitely wanted to visit.  I also had a big shopping list of baking-related items I wanted to get.  The first place I wanted to go though, was the Tea Room Garden.  According to the website:
Visitors will be able to sit back and relax in our Tea Room Garden, enjoying traditional scones and cream and of course cakes galore, while supporting the ongoing efforts of the wonderful team at Macmillan Cancer Support.
Charity, cake and most probably tea.  What a great place to start.  I made a beeline for it and have to confess, I was more than a little disappointed by what I found.  It was basically a cafe, with some astroturf and topiary.  The display counter had a few sandwiches and cakes in it, but nothing to justify its name of Tea Room Garden, so I went away cakeless, deciding it was much better contribute to Macmillan Cancer Support on their stand at the show rather than here.
No matter, I still had a whole show to see.  One of the first stands I came to was actually one that I'd been intending to seek out.  Simply Vintage Designs sell cake stands made from old, mismatched china.  You can select the plates and patterns you like from their stock which they've already drilled holes in, and they'll put them together for you into a 2 or 3 tier stand.  They also have tea cups and saucers, candles in tea cups, and other tea-related items.  I couldn't resist, and chose some plates for my own three tier cake stand. 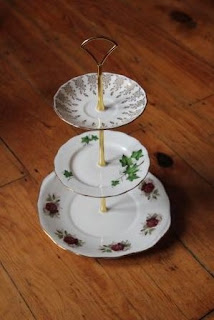 The next stand I came to was again one that I'd intended to find.  Pistachio Rose are a company that specialise in combining Indian flavours with cake.  Among the delights on offer were Chocolate Naan, Pistachio and Rose cake and mini flavoured madeleines.  The one that I couldn't resist trying though, was the Chai Spiced cake. 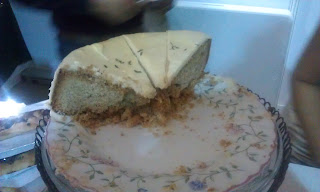 A lovely chai-flavoured cake with vanilla and chai frosting; I would happily eat this again.  The flavours blended really well together and were just the right strength.  I talked to Rekha, the owner and baker behind Pistachio Rose, about how long she's been baking, and how she used the chai flavour in this cake.  I'm not going to give away her techniques, I'm just going to say that she really got the flavouring right in this cake.  Pistachio Rose products are currently available in Fortnum and Mason, and they are now taking bookings for an Indian-inspired High Tea at the end of October.

There were other stands selling cupcakes, gourmet marshmallows, chocolate and baking equipment such as piping nozzles, icing bags, edible glitter, stencils, and even ready made cake mixes.  However, I was disappointed at both the range and amount of stands.  There were very few actual cake or bakery stands there, and the equipment stalls were very cupcake-centric.  There were hardly any cake tins available to buy, bread flour and baking was restricted to a couple of stands, and despite it being only a few months till Christmas, hardly any stands had ideas or equipment suitable for Christmas cakes.
Obviously, stands were by no means the only thing at the Cake and Bake show.  Something that really caught my eye was the Edible Beach competition.  Competitors had to design a beach-themed cake.  The entries were fantastic.  It was hard to tell the amateur categories from the professional ones. 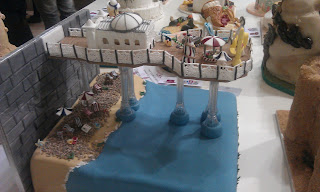 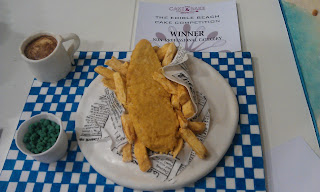 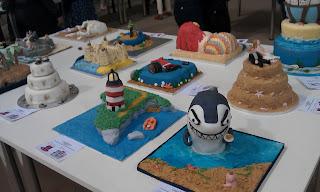 There were some brilliant entries, so creative and skillful, I really enjoyed looking at them all.

Also, there were workshops on everything from making chocolates to delicate sugarcraft.  These you had to pay an additional amount for, so with only 4 hours at the show I decided I didn't want to spend my time on this, but I did drop in on some of the free talks, including Paul Hollywood demonstrating some bread plaits, and two of the contestants from the current series of the Great British Bake Off making a cake together.  The last one was absolutely hilarious, as they are both amateurs at presenting and everything that could go wrong did.  My favourite part was when one of them accidentally got hot caramel into the host's eye, which he surreptitiously kept trying to remove at the same time as interviewing them about what they were doing.

There was however, a huge wasteland towards the back of the show.  The 'Wedding Cake Showroom' had roughly 6 cakes in it.  The workshop areas and 'classrooms' fed on to an almost empty area of seating, the Tea Room Garden, and the chocolate stands.  I felt really sorry for the people here as they were shoved right at the back and hardly anyone was going to them.  It was a waste of such a large area, they really could have fitted a lot more in.

My biggest gripe about the show was the lack of information.  The website wasn't fully updated, the Sugarcraft section was still missing its list of talks on the day of the show, when we got there the show guide (£3) had clearly been done before they'd decided to do an evening session, so it had all talks and workshops finishing before 6pm and was completely useless to us.  Judging by the tweets from the second day of the show, queuing and lack of refreshments were also a big problem.

Overall, I enjoyed my time at the show, but I'm glad I only had an evening ticket.  I really don't think there was enough there to hold my interest for an 8 hour day.  To be fair, it's the first time this show has happened, so the organisers didn't have much to go on.  I will probably go again next year, but only if there is a better website, a greater list of exhibitors and more information about the attractions on offer.