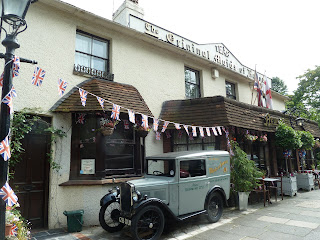 According to their website, the Original Maids of Honour tea room can trace its origins back to the early 18th century and the eponymous Maids of Honour pastries owe their name to the fact that apparently Henry VIII saw some of Anne Boleyn's maids of honour enjoying them and he tried them and confiscated the recipe. More on those pastries later.

It is a proper old-fashioned tea room with china knick-knacks, blue and white patterned plates and three-tier cake stands complete with doilies. Sugar comes in lumps (we approve), afternoon tea is served with cake forks and butter knives and extra hot water comes as standard with your tea order. There were metal teapots which we don't like so much, for both aesthetic and burnt finger reasons.

We ordered the "High tea" which included sandwiches, scones and a choice of cake. We three dispute that this is a high tea, as it's an afternoon tea in our opinion. Look out for a post on the difference between high tea and afternoon tea in the near future. 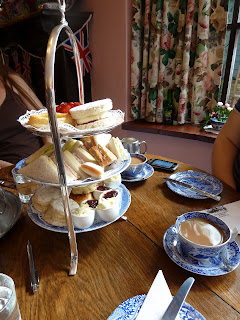 There was not a huge variety of teas on offer (a total of nine), with no green or white teas in the selection. All of them were Drury Company teas. According to Drury's website they have a large and varied range of teas that we'd be interested to explore, so it's a bit disappointing that the menu was rather limited. Considering the kind of tea room it is, not a hotel or a specialist tea supplier, we weren't expecting a huge range but we would have liked to see a green tea option.

Charlotte chose the Lapsang Souchong, Mo, the Assam and Caroline the Earl Grey. The Lapsang was nicely smoky without the heavy aftertaste that can sometimes accompany it. It was a clear favourite with all three of us. The Assam was good but the Earl Grey was disappointingly flavourless. We got a good quantity of tea with extra hot water and never needed to ask for more, although we're sure we could have. 21/30

There was a good selection of five different types of sandwiches, egg mayonnaise, ham, smoked salmon, cucumber and cheese. One small triangular sandwich of each per person. They were a bit of a mixed bag. The ham was excellent, the egg good, and the cheese fine but clearly pre-sliced cheddar. The cucumber had too much butter and was too thickly sliced and the smoked salmon tasted a bit poor quality. The score mainly reflects the selection and quantity rather than the quality. 21/30

We had one plain and one fruit scone each.  They were a decent size, homemade with individual pots of strawberry jam and clotted cream. Our opinions vary, we think due to scones being from different batches, but essentially they were fine. The plain scone was curiously covered in flour which ended up everywhere, including the table and Caroline's top. 21/30 (this is scarily consistent scoring!) 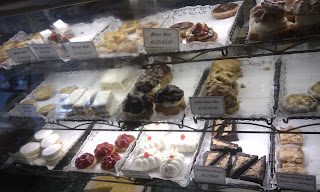 For the cake section, we could either have a Maid of Honour pastry or choose a cake from the counter. Caroline chose the traditional Maid of Honour which is rather like a Portuguese custard tart in appearance but the filling was more like a cross between a curd cheese and frangipane. Mo had an individual Victoria Sponge and Charlotte chose a strawberry tart. Our cakes were all nice but we do like when we can try a selection of little cakes rather than just one. 21/30 (getting spooky now)

In conclusion, it's a delightful old-fashioned tea room with a long and interesting history which we think will appeal to tourists as well as to locals. The atmosphere was relaxed and pleasant. After our food was finished we stayed for a while, finishing our tea without being hurried out.  Overall, we felt it was good value for money.

We also noted that they also do a tasty sounding lunch and the salmon and chicken pies looked amazing, so we may well go back there in the future.


Posted by Afternoon Tea Ladies at 22:41