Once again, the bargain-hunting Tealadies, having seen a Groupon offer for afternoon tea, leapt at the chance to try it out. This time our voucher was for a two-for-one afternoon tea with bubbly at the Montcalm, an impressive-looking Mayfair hotel. 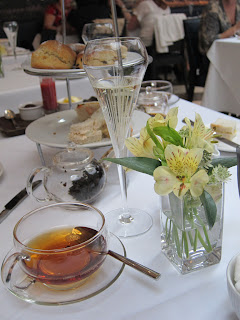 We were shown into the Crescent Restaurant and Lounge for our tea.  There was  a harpist near the entrance to the lounge providing some pleasant background music .

Inside, we asked if we had dietary requirements and given the tea menu.  The Montcalm serve Jing Teas and had an impressive 23 on offer. Looking at the Jing tea website, they have an extremely extensive range of teas and the 23 that the Montcalm have chosen give a good range of different types, with white, black, green and fruit teas all represented. We also were served with a glass of prosecco included in the afternoon tea which was good quality.

The teas all came in small glass teapots, big enough for one large cup. This highlighted the attractive flowering tea in particular and allowed the rest of us to judge the strength of the tea based on colour. We were all quite pleased with our teas, apart from the Earl Grey which we don't seem to be having much luck with. Once again, we judged it to be not "bergamoty" enough. We were given refills of hot water very promptly and in total got three top-ups and were even offered a fresh brew so never came close to running out of tea. We scored the tea at 26 out of 30. 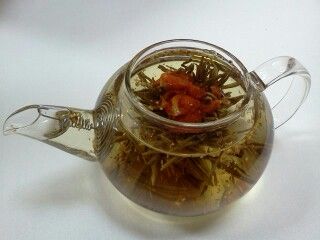 The food was served on a traditional three-tier cake stand with jam, clotted cream and interestingly, a shot of fruit smoothie on the side. The smoothie tasted very good but we weren't sure it added anything to the experience. 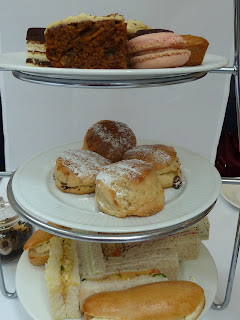 There were nine different types of sandwich and a bridge roll on offer - quite the biggest variety of sandwiches for an afternoon tea we've reviewed so far. There were bridge rolls with egg mayonnaise and capers, sandwiches with smoked salmon, crayfish, houmous and peppers, ham and mustard, cucumber and mint yogurt, trout paté, coronation chicken and roasted courgette and tomato. There  were almost too many and our only niggle, and it is just a niggle, was that aside of the bridge rolls there was only one of each, meaning we had to cut them all in half to make sure that we each got to try them all. We also liked the fact they came with differnt types of bread, including poppyseed.  We scored them 25 1/2 out of 30

The scones, again, followed the formula of one plain, one fruit per person. The jam was a little on the solid side which made spreading it a bit challenging, but the clotted cream was good and there was plenty of it.  The scones on the whole were fine, the plain ones were definitely the nicer of the two.  We scored them 20 out of 30.


There were five mini cakes each to round off the tea - a carrot cake, a fruit cake, a fruit tart , a  strawberry macaroon,and an opera cake.  We liked the selection available and though the carrot and fruit cakes were particular favourites, they were all good. We also liked the variety of cakes and felt there was something there for everyone.  We gave them 24 1/2 out of 30. 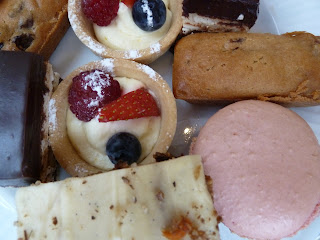 In conclusion, a delightful way to spend a Sunday afternoon. The atmosphere was relaxing and the service excellent throughout.


*We paid £33 for two via Groupon which was amazing value for money. We all agreed that we would be happy to pay the full price of £36.50 for what we received. Having just looked at their website again, I notice that there is a two-for-one special offer available. We recommend you give it a go.


Posted by Afternoon Tea Ladies at 23:13