We like to go out for Afternoon Tea -  but some people, notably Australians and Americans,  call the meal High Tea. 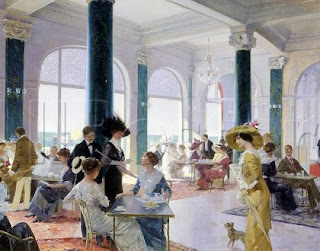 What's the difference?  Is there one?

Well, it’s a bit of a contentious subject.

The dictionary gives us these definitions:
Afternoon tea is a small meal snack typically eaten between 3pm and 5pm comprising tea, sandwiches scones and cakes or pastries.
High Tea sometimes known as a “meat tea” - a meal eaten in the late afternoon or early evening, typically consisting of a cooked dish, bread and butter, and tea.

So why are some very grand establishments serving tea, sandwiches, cakes and scones as High Tea?
It seems to have arisen out of confusion – “High “ rather suggests something grander and posher perhaps. But actually it seems that the reverse is true.

One theory suggests that the term was first used in the sense of well-advanced (like high time) to signify that it was taken later in the day than afternoon tea, as an early evening meal  –   originally for middle class children who would not be sitting down to dinner with their parents later.
The other version refers to the height of the tables;  high tea being served at a dining table with afternoon tea served in a salon or day rooms from low tables.   I have also seen the suggestion that it refers to a working class tea taken standing up at the mantelpiece by the man of house after coming home from work (being too dirty to sit down presumably). 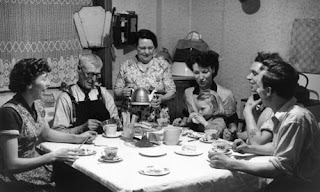 The first version sounds more plausible to me. Certainly , growing up in Scotland, “high tea” was a hearty early evening meal, a great treat. A cooked dish, served with bread and butter followed by tea and cakes,  There used to be a fish and chip shop in Biggar that did a particularly fine one.... ah, memories.

Finally, and just to muddy the waters further,  Mrs Beeton  described several different types of teas:  the old-fashioned tea, the at-home tea, the family tea and the high tea. 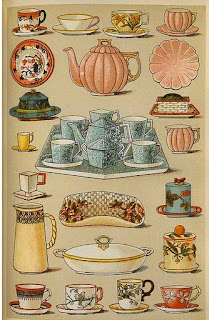 Whatever the origin of High Tea, it is clearly a very different thing from  the genteel meal reportedly invented by Anna, the 7th Duchess of Bedford, to combat "that sinking feeling" during the afternoon.

Ultimately, it doesn't really matter what you call it – as long as the tea is of good quality, the food is tasty and the company good.

Posted by Afternoon Tea Ladies at 22:05