Tea can be cool too

The recent surge in temperatures has got some people in London feeling sweaty, uncomfortable and trying to find ways to cool down.  Although we hate to admit it, it's not necessarily the weather for a boiling hot drink.  We've tweeted a few times recently about bubble tea and iced tea.  They're great ways to have a cool, refreshing drink at the same time as getting your daily dose of tea. 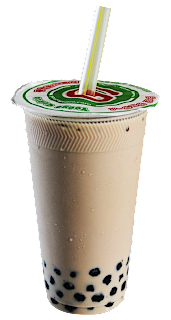 Bubble tea appeared a few years ago in London.  For a while, it was confined to specialised restaurants, principally in Chinatown.  Recently, however, bubble tea shops have been springing up, such as Chaboba in Camden, and Bubbleology which has several locations around the capital.  Bubble tea comes in various flavours, usually sweetened black or green teas with milk, or plain fruit teas.  All of them have balls of tapioca at the bottom, and come with a straw large enough to suck these up.  The first time you have it, it's a surprising novelty when you suck up some tapioca, and slightly disconcerting that there's something floating around at the bottom of your tea.  Once you get over that, though, you'll be able to decide if bubble tea is the drink for you.  It's a bit like marmite in the way that it splits people.  It's definitely worth a try, although if you don't like tapioca, you're probably not going to like this ("Bleurgh" - Mo). 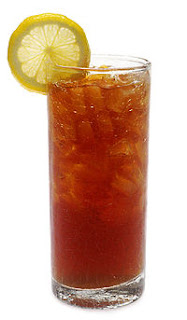 Iced tea, by contrast, is well established but not very popular in the UK.   However, it's widely drunk throughout Europe, Asia and especially in the US, where it makes up roughly 85% of all tea consumed there.  It's usually heavily sweetened and flavoured, which may account for its lack of popularity in this country.  It's slowly growing in popularity though, and if you want to try some unsweetened good quality iced tea, pop into one of Yumchaa's shops where you can try a peach flavoured green tea, and a matcha mixed with mango puree.  You can also find a brand called Adagio Teas in some shops, who do unsweetened, unflavoured iced tea, that comes in Oolong and White tea among others, and is delicious.  You can also get home delivery if you shop on their website.

So whether you like it with bubbles in or over ice, you can beat the heat and keep drinking your favourite cuppa.
Posted by Afternoon Tea Ladies at 20:41