Courthouse Doubletree by Hilton - Afternoon tea £35 for two with a voucher, normally £35 each 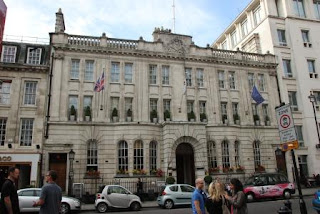 We three Tealadies are never one to pass up a bargain, especially when it involves tea and cake, so you won't be surprised to learn that when a Living Social voucher for half-price afternoon tea came along we jumped at the opportunity.

As Living Social afficionados, (nowadays, isn't everyone?), we're aware that sometimes what is on the voucher isn't exactly what you get, so we took our purchase with a pinch of salt.

We arrived at the Courthouse Doubletree by Hilton, an interesting hotel in central London, which used to be Great Marlborough St. Magistrate's Court . Don't miss a visit to the bar to see where the cells were! The afternoon tea itself was in the Carnaby, a pleasant brasserie on the ground floor with interesting photos of famous people being brought for trial at the old courthouse.  We were led to a table for four as today we had Dave, an honorary Tealady and designated photographer, accompanying us. 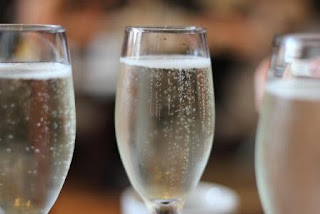 On arrival we were presented with a glass of bubbly, which had been poured elsewhere and brought to the table. The voucher promised champagne but our considered opinion was that it was more likely prosecco. Don't misunderstand - we like prosecco - but felt a little peeved that we hadn't been given what was promised.

The teas on selection were a tad disappointing. Considering the menu boasted 'a wide selection', there were only nine in total, two of which were herbal and one decaffeinated.  After the 94 of Camellia, this seemed very meagre indeed.  All the teas on the menu were from the London Tea Company.  Caroline chose the White tea with Apricot and Elderflower, Mo had the English Breakfast and Charlotte had the Earl Grey.  The quality was a bit mixed, as the English Breakfast was excellent but the Earl Grey barely tasted of Bergamot, even with the two tea bags that had been put in the pot. We did get more hot water when we asked and would have been given refills of tea if necessary, so they certainly weren't skimping on their quantities which we definitely appreciated. Overall we gave them 18 out of 30. 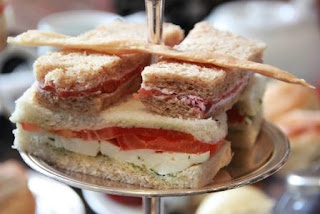 The sandwiches were disappointing - only two, a smoked salmon with dill and beetroot horseradish cream,  and a mozzarella, tomato and basil. Whilst the taste was nice, the lack of quantity and choice left us wanting more. The bread too tasted and looked like standard sliced white and brown from the supermarket rather than anything more appetising. Strangely, the sandwiches also came with a "crispy lavash", a crispy finger of flatbread which features in Armenian and Persian cuisine. Silk, the restaurant at the hotel has an Asian fusion menu which is maybe why this was included in the afternoon tea but since the tea itself wasn't themed we all felt this was a little out of place. We gave them 9 out of 30. 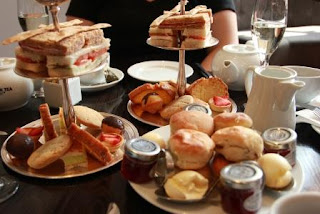 The scones occupied a plate of their own and there was a plain and fruit scone each with generous amounts of jam and clotted cream (no matter which you decide to put on first!) They were a little too stodgy for our tastes though and weren't warm. Overall they scored a reasonable 18 1/2 out of 30, the quantity pulling up the score where the quality was letting it down.

The cakes are where we really felt this afternoon tea was let down. On the face of it, there was a wide selection of miniature cakes, prettily displayed on the bottom layer of the cake stand. For each person there was a strawberry tart, shortbread, pound cake, a pistachio pastry (which contained no pastry), and a chocolate-dipped financier. However, all the offerings were similar in their relative plainness and starchiness. The shortbread was overdone, the pound cake dry, the financier dense and the pistachio cake bland. The strawberry tart came out on top for us but still it looked like something that had been bought in rather than made on site. Overall the cakes scored 17 out of 30, most of which is the quantity and selection of cakes skewing the result, in spite of the poor quality.

The atmosphere at the Carnaby was pleasant, and while we weren't rushed through our tea, we equally didn't feel inclined to linger, and were out in under 90 minutes. The service was inconsistent, from a very nice waiter who sadly seemed unclear as to what was going on, to a grumpy sour-faced waitress who was very difficult to hail.

As far as value for money goes, with the two-for-one offer we got, we thought it was okay though not great and we certainly would have felt hard done by if we had paid full price.


In conclusion: an interesting venue but the afternoon tea failed to live up to the surroundings.

Posted by Afternoon Tea Ladies at 22:13