Adding the word 'clotted' to a foodstuff doesn't automatically make it sound tastier.  You probably wouldn't want to eat clotted ham for instance.  Clotted cream, however, has risen above its name and become known across the world, principally in combination with scones and jam.  . 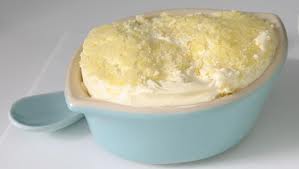 The origins of clotted cream are a bit hazy.  It may have been introduced to Cornwall by Phoenician traders looking for tin, or it may have simply originated from farmers in the South West looking for a way to reduce the waste products from their milk.  Orignally known as Clouted Cream, there are mentions of it as far back as 1300, and in 1579 it gets into Spenser's The Shepeardes Calendar


"Ne would she scorn the simple shepherd swain,
For she would call him often heam,
And give him curds and clouted cream."

It is of course, best known as part of a cream tea.  Anyone unfamiliar with this concept, please take note, the cream goes on the scones, not in the tea (yes, it does happen).  It is also a main part of an afternoon tea. If someone tries to fob you off with whipped cream you should complain loudly.

Clotted cream isn't solely the preserve of scones and jam though (pun intended).  In the South West, it's used to make fudge, chocolates, toffee, rice pudding and ice cream.  You can go into an ice cream parlour and get some ice cream made with clotted cream, and have it topped off with some clotted cream fudge and a big dollop of clotted cream.  It also goes well with strawberries, crumble, Christmas pudding, treacle tart, cheesecake, pretty much any dessert really.  Rodda's, makers of clotted cream have some savoury suggestions for it too, such as adding a spoonful to risotto, or garlic mushrooms.  Although it's not the healthiest food, a 100g tub of Clotted cream has the same amount of calories as a 200g cheeseburger, so if you're  feeling a little peckish, why not just grab a spoon and dig in.
Posted by Afternoon Tea Ladies at 15:49